What Great Minds Can Do: Sagarika Gujar 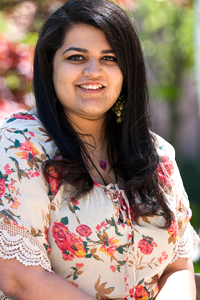 "My internship adviser played a pivotal role in landing my internships. Not only did she believe in me and encourage me, but she also helped me with my resume, presentation and networking skills. She connected me with two amazing internship experiences, one at the U.S. India Chamber of Commerce and the other at the Permanent Mission of India to the United Nations. Seton Hall definitely helped me build an excellent resume; the opportunities I received at Seton Hall have really given me an edge and made me competitive for my next chapter as I pursue my graduate degree at Oxford and for my future career aspiration to join India's foreign service."

Coming from India, Sagarika found a home at Seton Hall. "Everyone is so friendly and welcoming. They really value the fact that I am from another country and want to engage me in dialogue to enrich their educational experience," she says. "I love it here and have been able to find a home here, which is important because my home is so far away." A diplomacy and international relations major, Sagarika got a world-class education both inside and outside of the classroom. Her internship at the Permanent Mission of India to the United Nations had her competing against graduate students from Harvard, Columbia and other Ivy league schools. "I was nervous to apply because these internships are usually reserved only for graduate students from Ivy league schools. But my internship adviser really believed in me, encouraged me and helped me apply." Despite the fact that Sagarika was the only undergraduate intern working alongside Ivy league counterparts, India chose her as the only intern to represent them as a delegate at the United Nations. "I was very proud during negotiations with South Africa, Russia, China, Brazil and Caribbean nations that I was able to uphold India's positions on trade and intellectual property."

She found the experience amazing and profound: "I realized that I was at the U.N. in New York City and I was about to live my dream. That wouldn't have been possible had it not been for Seton Hall and all the opportunities I got here."

Sagarika's second internship at the U.S. India Chamber of Commerce had her assisting the Starbucks Coffee Company as it began plans to open its first franchises in India. "For me," she says, "it was not just 'cool' but also an opportunity to witness how a big economic institution employs different strategies to encounter new markets."

Thanks to her double major in modern languages (Chinese and Spanish), Sagarika now speaks seven languages. She credits Seton Hall not only with the tremendous opportunities she has been afforded, but also with helping her to strengthen her communication skills and confidence. Her next stop: graduate school. Though she has been admitted to several Ivy League institutions, she has decided to attend University of Oxford, following in the footsteps of Indira Gandhi and other political figures in India's history. Sagarika feels this will serve her well as she moves one step further toward her dream of joining India's Foreign Service.