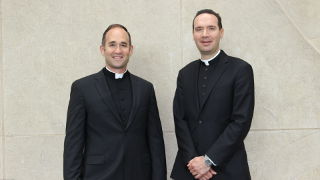 Seton Hall faculty members, Father Joseph Laracy and Father James Platania, served as lecturers at the "Magi Project Summer Seminar 2018" hosted by the Collegium Institute at the University of Pennsylvania.

The seminar's theme was "Cosmic Origins" and focused on questions including: How do the Big Bang Theory and Genesis fit together and can one believe in the modern physical mechanics of an inflationary Universe and also in God?

The conversation about the beginning of the Universe and the Big Bang Theory is an ongoing one around the world and forums like the Magi Project Summer Seminar allow researchers to integrate scientific and theological viewpoints into the discussion.

Fathers Laracy and Platania were among seven other scholars from institutions including Harvard, Oxford, and Princeton invited to attend as both lecturer and facilitator during the weeklong seminar. Father Joseph Laracy is an instructor in both the Department of Mathematics and Computer Science and the Catholic Studies Program within the College of Arts and Sciences and an affiliate of the Immaculate Conception Seminary School of Theology. Father James Platania is an assistant professor of Biblical Studies in the School of Theology.

While the seminar's core audience was a small cohort of graduate students from across the country in various fields of study, members of the public were welcome to attend the daily lectures. After a public lecture would end, the graduate student cohort would reconvene in small groups and further discuss the relevance of the lecture to their respective disciplines of physics, philosophy, and theology.

"I was glad that the question about the origin of the universe was explored in a way that presented science and religion not in conflict, but in dialogue," said Father Platania. "The students, who were from both the sciences and the humanities, equally sought to answer the question, 'where do I come from?,' which is a fundamental question for all of us." 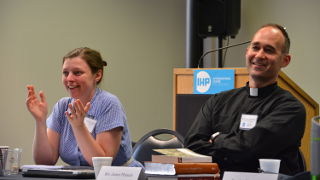 Father Platania's presentation, "Genesis and the Ancient Near East," compared and contrasted Enuma Elish and Atrahasis, the ancient creation myths of Mesopotamia, with the first creation account in the book of Genesis. Father Platania brought the ancient culture of Mesopotamia back to life in all of its richness and complexity. He argued that while the book of Genesis manifests many similarities to its ancient near eastern counterparts, it also presents newness in its depiction of an eternal, uncreated, monotheistic God who creates by the power of his word. 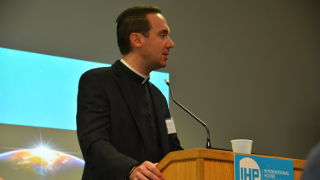 Father Laracy's presentation, "Theology of Creation," utilized the research of the late Father Stanley Jaki, O.S.B., former Seton Hall distinguished professor of physics, to show the connection between fundamental, Catholic doctrinal commitments on creation and the development of empirical science in medieval Europe. Catholic faith that God is the creator of the world, that He created from nothing, that He created directly, without secondary causes, and that He created the universe with time provided the fertile ground for the birth of science as we know it today.

"I was very honored to participate in The Magi Project's Summer Seminar on creation. Catholic Christians profess that God is the origin, foundation, and end of the universe," said Father Laracy. "The metaphysical concept of creation has been a subject of reflection by the most inquisitive minds since the great, ancient pre-Christian civilizations to the present. It is also very germane to the contemporary theological engagement with the natural sciences."

Seton Hall students interested in learning more about this topic have the opportunity to take "Creation and Science" (THEO 3585 / CAST 3003 / CORE 3983), a course taught by Father Laracy. The class seeks to deepen students' understanding of the relationship between the Catholic theology of creation and contemporary empirical science. Topics covered include the birth of science, the historical-philosophical environment of this birth, the interventions of recent Popes on the issue, the specificity of the cosmos as shown by current science, the unity of the cosmos and its beauty, the importance of philosophical realism, the doctrine of creation ex nihilo et cum tempore, the theory of the Big Bang and the theory of evolution.