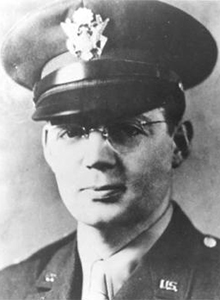 John Patrick Washington was born in Newark, New Jersey on July 18, 1908. His parents were Frank and Mary; in addition they had daughters Mary and Anna, and sons Thomas, Francis, Leo and Edmund. In 1914, John was enrolled at St. Rose of Lima Catholic Elementary School. In those days, times were rough for a poor immigrant family, but John had his father's Irish grin and his mother's Irish stick-to-itiveness. He liked to play ball, but he had a newspaper route to help his mother with extra money, since there were nine mouths in the Washington household to feed. John started to take piano lessons, loved music and sang in the church choir. When he entered seventh grade, he felt strongly about becoming a priest...during the previous year, he became an altar boy and his priestly destiny was in process. 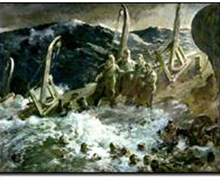 John entered Seton Hall College in South Orange, New Jersey to complete his high school and college courses in preparation for the priesthood. He graduated in 1931 with an A.B. degree. He entered Immaculate Conception Seminary in Darlington, New Jersey and received his minor orders on May 26, 1933. John excelled in the seminary, was a sub deacon at all the solemn masses, and later became a deacon on December 25, 1934. John was elected prefect of his class and was ordained a priest on June 15, 1935.

Father Washington's first parish was at St. Genevieve's in Elizabeth, New Jersey, and then he served at St. Venantius for a year. In 1938, he was assigned to St. Stephen's in Arlington, New Jersey. Shortly after the Pearl Harbor attack of December 7, 1941, he received his appointment as a chaplain in the United States Army. Father Washington went on active duty May 9, 1942. He was named Chief of the Chaplains Reserve Pool, in Ft. Benjamin Harrison, Indiana. In June 1942, he was assigned to the 76th Infantry Division in Ft. George Meade, Maryland. In November 1942, he reported to Camp Myles Standish in Taunton, Massachusetts and met Chaplains Fox, Goode and Poling at Chaplains School at Harvard.

Special congressional Medal of Valor awarded to the "Four Chaplains.

It was the evening of Feb. 2, 1943, and the U.S.A.T. Dorchester was crowded to capacity, carrying 902 service men, merchant seamen and civilian workers.

Once a luxury coastal liner, the 5,649-ton vessel had been converted into an Army transport ship. The Dorchester, one of three ships in the SG-19 convoy, was moving steadily across the icy waters from Newfoundland toward an American base in Greenland. SG-19 was escorted by Coast Guard Cutters Tampa, Escanaba and Comanche. Hans J. Danielsen, the ship's captain, was concerned and cautious. Earlier the Tampa had detected a submarine with its sonar. Danielsen knew he was in dangerous waters even before he got the alarming information. German U-boats were constantly prowling these vital sea lanes, and several ships had already been blasted and sunk.

The Dorchester was now only 150 miles from its destination, but the captain ordered the men to sleep in their clothing and keep life jackets on. Many soldiers sleeping deep in the ship's hold disregarded the order because of the engine's heat. Others ignored it because the life jackets were uncomfortable.

On Feb. 3, at 12:55 a.m., a periscope broke the chilly Atlantic waters. Through the cross hairs, an officer aboard the German submarine U-223 spotted the Dorchester. The U-223 approached the convoy on the surface, and after identifying and targeting the ship, he gave orders to fire the torpedoes, a fan of three torpedoes was fired. The one that hit was decisive--and deadly--striking the starboard side, amid ship, far below the water line. Danielsen, alerted that the Dorchester was taking water rapidly and sinking, gave the order to abandon ship. In less than 20 minutes, the Dorchester would slip beneath the Atlantic's icy waters.

Tragically, the hit had knocked out power and radio contact with the three escort ships. The CGC Comanche, however, saw the flash of the explosion. It responded and then rescued 97 survivors. The CGC Escanaba circled the Dorchester, rescuing an additional 132 survivors. The third cutter, CGC Tampa, continued on, escorting the remaining two ships.

Aboard the Dorchester, panic and chaos had set in. The blast had killed scores of men, and many more were seriously wounded. Others, stunned by the explosion were groping in the darkness. Those sleeping without clothing rushed topside where they were confronted first by a blast of icy Arctic air and then by the knowledge that death awaited.

Men jumped from the ship into lifeboats, over-crowding them to the point of capsizing, according to eyewitnesses. Other rafts, tossed into the Atlantic, drifted away before soldiers could get in them.

Quickly and quietly, the four chaplains spread out among the soldiers. There they tried to calm the frightened, tend the wounded and guide the disoriented toward safety. "Witnesses of that terrible night remember hearing the four men offer prayers for the dying and encouragement for those who would live," says Wyatt R. Fox, son of Reverend Fox. One witness, Private William B. Bednar, found himself floating in oil-smeared water surrounded by dead bodies and debris. "I could hear men crying, pleading, praying," Bednar recalls. "I could also hear the chaplains preaching courage. Their voices were the only thing that kept me going." Another sailor, Petty Officer John J. Mahoney, tried to reenter his cabin but Rabbi Goode stopped him. Mahoney, concerned about the cold Arctic air, explained he had forgotten his gloves. "Never mind," Goode responded. "I have two pairs." The rabbi then gave the petty officer his own gloves. In retrospect, Mahoney realized that Rabbi Goode was not conveniently carrying two pairs of gloves, and that the rabbi had decided not to leave the Dorchester.

By this time, most of the men were topside, and the chaplains opened a storage locker and began distributing life jackets. It was then that Engineer Grady Clark witnessed an astonishing sight.

When there were no more lifejackets in the storage room, the chaplains removed theirs and gave them to four frightened young men.

"It was the finest thing I have seen or hope to see this side of heaven," said John Ladd, another survivor who saw the chaplains' selfless act. Ladd's response is understandable. The altruistic action of the four chaplains constitutes one of the purest spiritual and ethical acts a person can make. When giving their life jackets, Rabbi Goode did not call out for a Jew; Father Washington did not call out for a Catholic; nor did the Reverends Fox and Poling call out for a Protestant. They simply gave their life jackets to the next man in line.

As the ship went down, survivors in nearby rafts could see the four chaplains--arms linked and braced against the slanting deck. Their voices could also be heard offering prayers. Of the 902 men aboard the U.S.A.T. Dorchester, 672 died, leaving 230 survivors. When the news reached American shores, the nation was stunned by the magnitude of the tragedy and heroic conduct of the four chaplains.

"Valor is a gift," Carl Sandburg once said. "Those having it never know for sure whether they have it until the test comes."

The Distinguished Service Cross and Purple Heart were awarded posthumously December 19, 1944, to the next of kin by Lt. Gen. Brehon B. Somervell, Commanding General of the Army Service Forces, in a ceremony at the post chapel at Fort Myer, VA.

A one-time only posthumous Special Medal for Heroism was authorized by Congress and awarded by the President Eisenhower on January 18, 1961. Congress attempted to confer the Medal of Honor but was blocked by the stringent requirements that required heroism performed under fire. The special medal was intended to have the same weight and importance as the Medal of Honor.

(The above text is from http://fourchaplains.org/.) 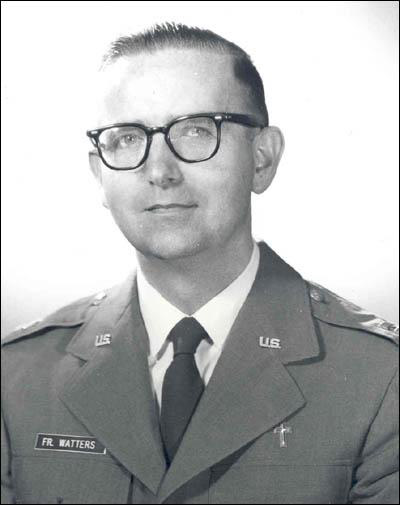 Chaplain Watters was born in Jersey City, N.J., Jan. 17, 1927, and attended Seton Hall College and Immaculate Conception Seminary. He was ordained in 1953 and served parishes in Cranford, Jersey City, Paramus, and Rutherford, N.J., before becoming a New Jersey Air National Guard chaplain in 1962 and an active-duty Army chaplain two years later. Sent to Vietnam in 1966, Chaplain Watters served the required 12-month tour and volunteered to stay for six more months.

Chaplain Charles J. Watters served with the 173rd Airborne Brigade. After ministering day and night to the men of the 2nd battalion, 503rd Infantry, in a battle that was to rage for 12 days, he was killed while helping care for the wounded. Chaplain Watters received the Congressional Medal of Honor posthumously. He is one of seven chaplains to have been awarded this medal, the highest decoration in the United States Military Forces.

The Army Chaplain School in Fort Jackson, South Carolina, is named in his honor. Father Watters is buried in Arlington National Cemetery.

The Medal of Honor

The President of the United States, in the name of The Congress takes pleasure in presenting the Medal of Honor to Watters, Charles Joseph

For conspicuous gallantry and intrepidity in action at the risk of his life above and beyond the call of duty. Chaplain Watters distinguished himself during an assault in the vicinity of Dak To. Chaplain Watters was moving with one of the companies when it engaged a heavily armed enemy battalion. As the battle raged and the casualties mounted, Chaplain Watters, with complete disregard for his safety, rushed forward to the line of contact. Unarmed and completely exposed, he moved among, as well as in front of the advancing troops, giving aid to the wounded, assisting in their evacuation, giving words of encouragement, and administering the last rites to the dying. When a wounded paratrooper was standing in shock in front of the assaulting forces, Chaplain Watters ran forward, picked the man up on his shoulders and carried him to safety. As the troopers battled to the first enemy entrenchment, Chaplain Watters ran through the intense enemy fire to the front of the entrenchment to aid a fallen comrade. A short time later, the paratroopers pulled back in preparation for a second assault. Chaplain Watters exposed himself to both friendly and enemy fire between the 2 forces in order to recover 2 wounded soldiers. Later, when the battalion was forced to pull back into a perimeter, Chaplain Watters noticed that several wounded soldiers were lying outside the newly formed perimeter. Without hesitation and ignoring attempts to restrain him, Chaplain Watters left the perimeter three times in the face of small arms, automatic weapons, and mortar fire to carry and to assist the injured troopers to safety. Satisfied that all of the wounded were inside the perimeter, he began aiding the medics--applying field bandages to open wounds, obtaining and serving food and water, giving spiritual and mental strength and comfort. During his ministering, he moved out to the perimeter from position to position redistributing food and water, and tending to the needs of his men. Chaplain Watters was giving aid to the wounded when he himself was mortally wounded. Chaplain Watters' unyielding perseverance and selfless devotion to his comrades was in keeping with the highest traditions of the U.S. Army.