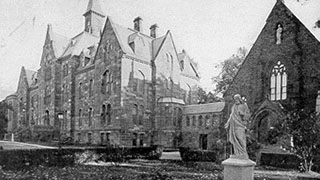 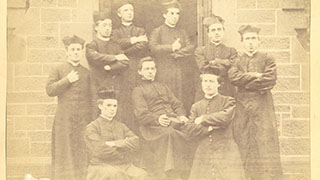 The curriculum, as it was developed in response to the Third Plenary Council of Baltimore, was, for the first time, given in detail in the 1898 catalogue. It remained virtually unchanged through 1926, with the unfortunate elimination of Hebrew. The emphasis was on dogmatic and moral theology, each taught five hours weekly for eight semesters. The seminarian of this era would have had the equivalent of 40 credit hours in both of these disciplines. An additional hour was set aside for a pastoral conference and cases of conscience. In addition, each week there was a disputation, in which students were assigned theses to defend.

The exact hours for instruction in sacred eloquence are not specified but included instruction in theory and an annual sermon before faculty. Liturgy was covered by special classes before ordination and, through the years, by practice for ceremonies. Latin and Greek proficiency would have been achieved during the college and philosophy years. The only changes made over the years to 1926 were dropping the requirement for Hebrew and adding one hour per week for liturgy in addition to the special classes before ordination.

The table below gives us an idea of the curriculum, which, in today's calculation, would include more than 140 credit hours.

Seminary Life in the 19th Century

Twenty-eight-year-old Father Michael Corrigan assumed the presidency of Seton Hall College and the “Ecclesiastical Seminary” on June 24, 1868.He named his 24-year-old brother, Reverend James H. Corrigan, ordained the year before, as director of the seminary.

The 29 seminarians (1871) were under the guidance of a president, a director, and two professors, all but one under 30 years of age. This was not unusual. In the mid-nineteenth century, many American seminaries functioned with only two or three professors, many of them newly ordained. They would teach all of the “sacred sciences,” relying on standard manuals.

The academic schedule was grueling. Seminarians attended class every weekday except Thursday. Forty-five-minute classes were conducted from 8 a.m. to noon with a 15 minute break. They resumed at 2 p.m. and ran until 6:45 p.m. with an hour's intermission at 4:15 p.m. Normally seminarians had five or six periods per day. For many of the subjects, seminarians of all four years of theology were joined together in one classroom.

The courses were taught on a cycle. Over the four-year course, the seminarian would have taken all his theology courses, but in no particular sequence. Most classes in the theological disciplines were conducted in Latin. Others, such as ecclesiastical history and canon law, were taught in English. Reliance on textbooks was such that classes did not require a great deal of preparation and, as we have seen, a professor often would teach quite diverse subjects. Instruction consisted in simply translating and explaining the text. This practice was not unusual; rather it was the norm of the time.

Seminarians continued to serve as dormitory and study hall prefects, and some taught in the college. They supervised a diverse group of college students, including collegians from Spain, Mexico, Colombia, and Cuba, as well as from more than eight states. In the 1870s one could find seminarians teaching geography, history, and bookkeeping.

As they completed the college course, seminarians were awarded the B.A. degree. After two years of theology, they had the opportunity to receive the master of arts (M.A.) degree in theology. While many seminaries of the time did not confer degrees, Immaculate Conception Seminary granted them as a unit of Seton Hall College, which was chartered by the state of New Jersey.

Seminarians serving as college prefects and teaching in the college created a situation in which the customary isolated, monastic life of a free-standing seminary was difficult. The seminarians had the run of the 60-acre Seton Hall campus, including its fields and paths. Some helped in the farm, which continued in existence into the twentieth century. But only with permission could they leave the property either to go home or to visit the nearby village of South Orange.

Their program was governed by a rule, of which unfortunately we have no copies. If we may judge by the rule for the college, it was rather strict, not uncommon in contemporary colleges. The college students were not allowed to leave the grounds without a teacher, and were forbidden to use tobacco. They could not possess any textbooks without the permission of their professors, or any other books without the permission of the president. No newspapers were allowed, except in the reading room. They were allowed to correspond only with their parents, but the president reserved the right to examine all incoming and outgoing letters.

During the school year, rising was at 5 a.m., with prayer and meditation in the chapel from 5:30 a.m., preparing for Mass at 6 a.m. According to the advice of their confessors, seminarians received Communion infrequently, no more than once a week, and normally on the first Friday of the month. In conformity with the liturgical calendar, Lent was a time of penance, the specific dietary regulations enforced by the seminary and the college.

The Mass was, except on special holy days, a low Mass. After Mass, there was time for breakfast and preparation for class that began at 8 a.m.

Thursday was a free day for seminarians and collegians to catch up on their studies and to recreate. There was a gymnasium in the college building and opportunities for walks on the property. Sunday also brought a more relaxed schedule. The seminarians sang the high Mass in the chapel joined by collegians and, until the establishment of Our Lady of Sorrows Parish in South Orange in 1887, the Catholics of the village.

Seminary life was interrupted at various times by the joyful celebration of ordinations. Faculty would evaluate candidates based on their external conduct, academic achievement, fidelity to the rule, and the faculty member's personal observations. In the early 1870s, tonsure was the first step, normally shortly after admission to the seminary. The minor orders of porter, lector, exorcist, and acolyte often were given together. The major orders -- subdiaconate, diaconate, and priesthood --followed in third- or fourth-year theology, all received over the period of a few weeks, even a few days. This changed in May 1876, when Corrigan complied with instructions from the Holy See not to bestow all sacred orders in one week. From this time on, tonsure and minor orders were spread out over second and third theology, and major orders over a period of months in fourth theology. While ordination to the priesthood normally took place in the cathedral, occasionally it was conferred in the seminary chapel. All other orders were received in the chapel.

During the year, the seminarians attended and often participated with the collegians in monthly celebrations with “literary and musical entertainment,” and with occasional concerts in the chapel. These were coordinated to coincide with St. Cecilia's Day, Thanksgiving, Christmas, Washington's Birthday, and St. Patrick's Day. These occasions were marked by students giving orations on a number of topics such as “The Invasion of Rome” in 1870, “Heroes of the American Revolution,” “Ecclesiastical Councils as Guardians of Morality,” and “Seminary Philosophy.” Musical concerts included sacred music as well as Verdi, Donizetti, and Offenbach.

On November 22, 1871, seminarians enjoyed a “Literary and Musical Entertainment” observing the Festival of St. Cecilia. The program shows an impressive combination of musical and oratorical skill for such a small institution. How much the various orations interested the students remains unknown.

Seton Hall College's first quarter century and the seminary's first two decades were guided by the founding bishop of Newark, James Roosevelt Bayley, and his successor, Michael Augustine Corrigan. Until 1868, they had the more than able assistance of Bernard J. McQuaid. In fact, it may be argued that, without McQuaid, Seton Hall, both college and seminary, would never have survived its first decades. The last two decades of the nineteenth century would see a new bishop at the helm of the diocese of Newark, and be a time of new crises, as well as a time of calm and consolidation.

But a silver jubilee in 1881 was a time to celebrate. The Silver Jubilee Dinner on July 14, 1881, was no small event. Administrators, professors, alumni, guests, and perhaps some lucky seminarians feasted on a meal typical of the Gilded Age.