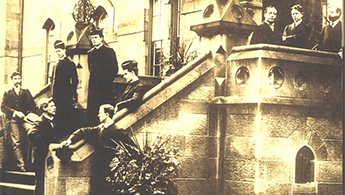 1866. The Seminary in the center, with
the College Building on the left and the
Chapel on the right.

"Near midnight, on Saturday, January 27th, when the temperature was at the freezing point, and sleet and snow lay on the ground, the college was roused by the cry, Fire! Fire! And in less than four hours all that was left of the once beautiful marble villa, was a smoking mass of ruins." As soon as the fire was discovered, McQuaid dispatched a messenger by sleigh to the chief of the Newark Fire Department, who dispatched steamer No. 3. The chief ordered two extra horses attached to the steamer and they galloped off to the college.

The fire had originated in the third story of the Marble House, housing the seminary. The flames spread rapidly to the roof. The fire department arrived but it was too late to save the Marble House. Water was drawn from a neighboring brook and poured into it and upon adjoining structures, confining the fire to the Marble House. Faculty and students removed as much furniture, books, and papers as they could. Priests, professors, and students set to work with a will, and through their bravery and activity, some of the furniture and valuable books and papers were saved and the fire confined to the building in which it originated.

Reverend George Hobart Doane, chancellor of the diocese, heard of the fire early the next morning. He immediately drove in a sleigh from Newark to the Passionist Monastery in West Hoboken (now Union City), New Jersey, where Bishop Bayley was making a visitation. He informed the bishop of the destruction of the Marble House, and the two then went to South Orange to view the ruins.

Upon their arrival, they found a very anxious Father McQuaid. Bayley, after learning that no lives were lost or injuries received, tried to ease McQuaid's nervousness by asking, "Father McQuaid, did they save my grandmother's blue arm chair?" McQuaid assured him the armchair was safe and Bayley replied, "That's good; we can build another college but could not replace my grandmother's arm chair."

Seventy-two hours later, Bayley sent out a circular announcing a diocesan collection modestly calling for a new building, "a plain and substantial structure."