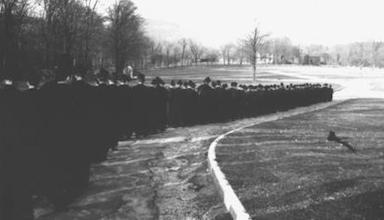 The purpose of the rule was not simply to maintain discipline and order in the seminary but to enable the seminarian "to acquire priestly perfection through the exercise of the virtues of charity, obedience, and self-denial."

Each year began with a six-day retreat. The first Sunday of each month was a recollection day, with additional spiritual conferences and exercises in addition to the Sunday Solemn Mass and Vespers. Exemplifying the devotional spirituality of the time, the schedule gradually over the years was amplified by novenas preceding major feasts of Our Lord, the Holy Spirit, the Blessed Virgin, and St. Joseph. The solemnities of St. Thomas Aquinas and St. Francis de Sales were observed with additional devotions. During the month of May, the Litany of Loreto was recited daily, and during October the rosary, litanies, and prayers to St. Joseph were recited before the Blessed Sacrament. 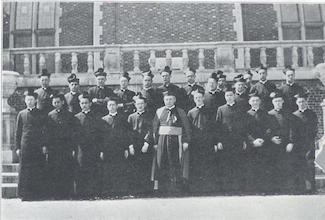 On the first Friday of every month, special devotions to the Sacred Heart included the recitation of acts of consecration and of reparation followed by benediction. On rogation days, the litanies were chanted in procession, often outdoors, before the community Mass. Since, during dry spells, the purpose of the procession was to intercede to end the drought, the seminarians referred to the procession as the "rain dance." The Church Unity Octave was celebrated from January 18 through 25, with the recitation of the prescribed prayers. The anniversary of the election of the reigning pontiff was celebrated with "suitable solemnities."

Christ the King Sunday, which would become the patronal feast of the seminary church, was celebrated with supplementary litanies and spiritual exercises in addition to the usual October devotions and solemn Mass and vespers. Seminarians often referred to endless devotions of that particular day as the "Mystical Marathon."

The virtues of obedience and modesty were exalted in the rule. Seminarians were to recognize and venerate "the person and authority of God" as manifest through the rule and the directives of seminary authorities. Toward one another they were always to exercise fraternal charity and refrain from back-biting and gossip, always giving good example. Seminarians were directed to address one another by their Christian names, refraining from nicknames.

Modesty required the seminarians to shun pride that "renders men enemies of God and odious to their fellows." They were not to "loiter in windows." They were always to walk quietly and with dignity, never waving their arms indecorously, rolling their eyes, or speaking with a loud voice. Silence was to be maintained in the corridors at all times and the "Great Silence" was in effect from evening prayer until after breakfast the next morning. To assure quiet in the building, they were obliged to wear shoes with rubber, not leather, heels.

Rome had directed that "care of the body should always be circumscribed by such precautions as Christian modesty demands, precautions which unfortunately the world often pays little attention to: for which reason the Church disapproves and condemns such practices." To guarantee modesty, a dressing room was provided adjacent to the showers. In going from their rooms to the dressing room and from the dressing room to the showers, the seminarians were to wear bathrobes. The rule stated: "Neither the dressing room nor the shower room is a place of recreation. Silence must be maintained in both places at all times."

When at the lake, their swimming costume was to completely cover their upper body and reach usque ad genua, to their knees. The "bathing suit should have a top that covers back and front, and trunks of the style of gym shorts." For recreation "the student should have dark gray slacks and a white sport shirt with at least half sleeves." In the rooms mirrors were placed so that they could reflect only the shoulders and face.

Regarding dress, seminarians were to wear the cassock and biretta, and the zimarra (a heavy, ankle-length coat with a shoulder cape) in winter; a black suit and tie, and a hat, when away from the seminary. Each student was required to furnish his own personal clothing, toilet accessories, books, stationary, towels, and an inexpensive napkin ring clearly marked with the student's name. Their personal clothing included "sufficient light and heavy underwear for one year, one black suit, one black overcoat and hat, cassock, zimarra, serge biretta, three plain linen surplices, one dozen clerical collars, one black necktie, black trousers, sweater and cap, shoes, rubbers, umbrella, black raincoat, black book bag, and two laundry bags. . . . The cassock should be a Roman cassock, i.e., one with the buttons down the front and without the sash." These garments always were to be clean and neat.

Seminarians were not allowed to introduce any items into their rooms, including electric bulbs other than those supplied by the seminary. Originally, they could have no personal pictures in their rooms, only a picture of Our Lord, the Blessed Virgin, or a saint. When the new seminary was completed they were forbidden "to introduce into their rooms any article of furniture or any pictures or decorations beyond those supplied by the seminary."

At meals, seminarians sat in assigned places and waited on tables. They were urged to observe proper table manners and not to eat either too slowly or too quickly, never leaving scraps on the tablecloth. They were never to engage in frivolous conversation at table. Normally, meals were accompanied by spiritual reading, except for breakfast, which was in silence. They were forbidden either to remove any food from the dining room or to have any food in the rooms; any food received from outside was to be turned over to the rector. After meals, on the way to the chapel for prayer, the seminarians were to recite the lengthy Latin prayer, the Benedicite.

Recreation was mandatory. In all sports, seminarians were to be governed by charity and priestly gravitas. Rome had counseled seminary authorities that "sports are a means not an end in themselves . . . the seminary . . . has not been established to turn out athletes who are able to exhibit their skill and prowess before the public on the athletic field. Rather, the purpose of the seminary is to turn out athletes who will fight bravely the battles of the Lord." Any gambling on the outcome of games was strictly forbidden.

While on recreation, seminarians were forbidden to go near the homes of the seminary's workers or places reserved for the faculty. On Thursdays, they were allowed to go on "grand walks" on the spacious grounds and, with the permission of the rector, to go beyond the limits of the property. Before and after these walks, they were to visit the Blessed Sacrament. At all times seminarians were counseled to avoid "particular friendships" and "exclusive groups."

Only for a grave reason was a seminarian given permission to use the telephone, and never was he allowed to receive a telephone call. Seminarians were required to place their outgoing mail in a special box for possible inspection by the vice rector. Incoming mail likewise was subject to inspection by the vice rector before distribution. Federal laws regarding mail did not apply within the bounds of Darlington. Any "clandestine correspondence" rendered a student subject to dismissal.

On the second Sunday of each month, Christmas, St. Stephen's Day, Easter, All Saints, May 30, July 4, Labor Day, and Thanksgiving Day, seminarians could receive family and friends from 2:30 to 5 p.m. in the library and the parlors.

Seminarians were prohibited from receiving or having in their possession any newspapers or journals, even Catholic ones. In the seminary library, students were appointed to catalogue and shelve books. All books without a religious or historical theme were prohibited. Only during study times were seminarians allowed to use the library.

Day-to-day Life of the Faculty at Darlington 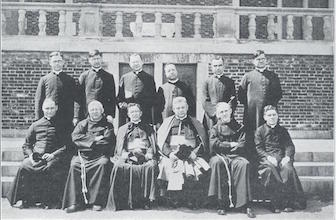 1931. The faculty of Immaculate Conception Seminary

It was not just the seminarians who were under a strict regimen. The faculty had their days regulated as well. Shortly after the move to Darlington, McLaughlin announced to the faculty members that, at "the direction of the Right Reverend Bishop . . . in all matters of an ecclesiastical or scholastic character, the priests of the household are subject [to the rector] in all matters as to their pastor." In other words, he was in charge.

He then informed them that they would take turns conducting High Mass and vespers "in the descending order of seniority by ordination," and established the schedule for daily Masses during the school year. During the summer, all priests were to take turns at duty with the seminarians for disciplinary purposes and to provide Mass in the various chapels. During the vacation period "two priests will be expected to remain on duty to sleep in the main house and provide Mass there and in the sisters' house." Except on their day off, faculty members were to secure the approval of the rector in case of absence.

In addition to their seminary duties, the priests served the parish at Darlington. In 1928, shortly after the seminary moved to Darlington, Bishop Walsh established the parish of the Immaculate Conception, on property adjoining the seminary land. The rector of the seminary was named pastor, and the priests of the seminary served the parish. Deacons were assigned to preach, many delivering their first sermon to the local congregation. Services were conducted in an old carpenter shop. Faculty members also assisted at Sunday Masses in Paterson and Nutley, New Jersey. In the neighborhood they offered Mass at the Boy Scout camp and the Civilian Conservation Corps Camp. Continuing the custom of Seton Hall, half of their Mass stipends were given to the seminary.

When the new building opened, Bishop William Griffin, McLaughlin's successor, became McLaughlin's equal in issuing directives that ordered the lives of faculty, students, and employees. He assigned specific faculty members to live in the student residence. Father Donnelly, vice rector, and Father McCarthy, spiritual director, were assigned because of their offices, a custom that would continue for almost the entire time the seminary remained at Darlington. Other priests were assigned to the student residence as well.

The priests living in the student residence were told to "exercise a general supervision" over the discipline in the immediate neighborhood of their rooms. Griffin instructed, "This supervision need not be of such a character that it would interfere with the hearing of confession by priests other than Father Donnelly."

Only the vice rector and the spiritual director were directed to eat with the seminarians, at a "high table" set on a platform. The faculty was to dine together in the Crocker Mansion. Exceptions were made. Priests residing in the new building were allowed to take their meals in the seminarians' dining room "if the weather be inclement or if the priest be indisposed."

Read more about the curriculum »