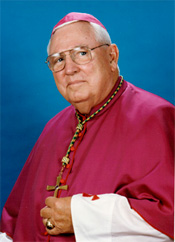 Peter Leo Gerety, the first of nine sons of Peter Leo Gerety and Charlotte Ursula Daly Gerety, was born on July 19, 1912 in Shelton, Connecticut. There he attended Commodore Issac Hull School and the Ferry Street School, graduating from Shelton High School in 1929. After working for the United States Department of Agriculture and the New Jersey Transportation Department, he entered St. Thomas Seminary in Bloomfield, Connecticut in 1932 as a candidate for the priesthood in the Archdiocese of Hartford.

In 1934, he was sent to Paris to complete his studies at the Seminary of St. Sulpice. After ordination in the Cathedral of Notre Dame in Paris, Father Gerety returned to Connecticut and spent almost twenty-seven years in parish work in New Haven, Connecticut. From 1942 until he was appointed bishop in 1966, his life as a priest was largely devoted to the service of the Black Catholic community of New Haven, developing what eventually became Saint Martin de Porres parish.

In 1966, within a year of the close of the Second Vatican Council, he was appointed Coadjutor Bishop of Portland, Maine, becoming diocesan bishop two years later. In 1974, Bishop Gerety was named Archbishop of Newark, a post he held until his retirement in 1986. Archbishop Gerety entered into eternal life on September 20, 2016 at the age of 104.

The Archbishop Gerety Fund for Ecclesiastical History was established by the Most Reverend Peter Leo Gerety, Archbishop Emeritus of Newark, to advance studies in ecclesiastical history, especially the history of the Roman Catholic Church in the United States. Among its various activities, the Fund sponsors two lectures annually at the beginning of the fall and spring terms. The Fund also sponsors annual awards for excellence in the study of the history of the Church for students of Immaculate Conception Seminary School of Theology. In addition, the Fund sponsors awards for monographs on the history of Catholicism in the United States with special emphasis on the history of Catholicism in New Jersey.