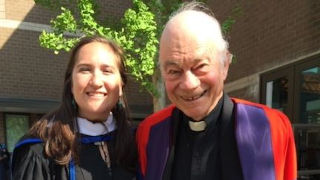 A recent article published in The Washington Post featured former Sister Rose Thering Fund scholar Jordyn Barry, M.A. '14, a graduate of the M.A. in Jewish-Christian Studies program in the College of Arts and Sciences.

The article focused on the true definition of Judaism in light of President Trump's executive order, which states anti-Semitism is indictable under Title VI of the Civil Rights Act. The clause specifically prohibits discrimination on the basis of race, color and national origin, not on the basis of religion. Barry discusses how the signed order may increase the ambiguity of the Jewish identity. The article notes:

"Barry, director of innovation and teen engagement at the Pozez Jewish Community Center of Northern Virginia, said that before last week, the only time anyone asked her whether Judaism is a nationality was when she taught seventh-graders about the Holocaust. This week, adults walked into the JCC in Fairfax to share their thoughts and seek hers. 'It's definitely brought the conversation of Judaism as nationality to the forefront,' Barry said."

Barry is also an educator at Temple Rodef Shalom, the largest Jewish congregation in the Commonwealth of Virginia.

Read the full article in The Washington Post, "Is Judaism an ethnicity? A race? A nationality? Trump signs an order and provokes an identity crisis."

Fostering understanding through education and inter-religious cooperation since 1993, the Sister Rose Thering Fund for Education in Jewish-Christian Studies began as a supporting wing of the Department of Religion at Seton Hall University. Its mission is to advance Sister Rose Thering's legacy by fostering understanding and cooperation among Jews, Christians and people of other religious traditions through advocacy and education.