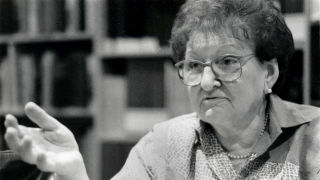 The bill mandates that schools teach students about the Holocaust and other genocides at least once in both middle school and high school. The bill also requires that the state superintendent consult with the Nathan and Esther Pelz Holocaust Education Resource Center (HERC), a program established by the Milwaukee Jewish Federation. According to Senator Alberta Darling, who spearheaded the bill, it will ensure that the voice of survivors is preserved forever as well as the important lessons associated with the Holocaust.

Sister Rose Thering was a lifelong activist who fought anti-Semitism within the Catholic Church and built bridges between those of the Jewish and Christian faiths. She felt as though it was her responsibility to bridge this gap because "an understanding and an appreciation of Jews and Judaism and the State of Israel helps me personally. I hope and pray to become a better person, a better Christian." The University's Sister Rose Thering Fund aims to carry her legacy forward by fostering understanding and cooperation among Jews, Christians, and people of other religious traditions through advocacy and education.

To read more about the Holocaust Education Bill in Wisconsin, click here »