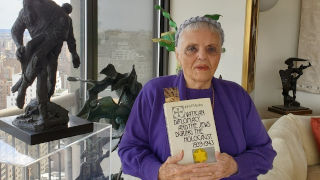 Luna Kaufman cherishes the book presented to her by Father Morley.

Collaborating in the pioneering work of interfaith dialogue and a legacy of building bridges between the Catholic Church and the Jewish community for more than 50 years, Luna Kaufman reminisced on her cherished friendship with the late Rev. John Francis Morley, who passed away on April 8.

Kaufman, a Holocaust survivor, educator, activist, author and lecturer, is a trustee and chairperson emerita of the Sister Rose Thering Fund for Jewish-Christian Studies, a recipient of an honorary doctorate from Seton Hall University in 2009, as well as the Knight's Cross of the Order of Merit, given to her by the president of Poland in 2011.

"It was in the late 1970s that I received an invitation from a professor from Seton Hall, Father John Morley. He learned about my existence from his student, Dana Rosamilia from Watchung. I was very surprised that this girl remembered me. When she was seven years old, she was a member of the Junior Girl Scouts troop of which I was co-leader with her mother Myrna, a devout Catholic," said Kaufman.

Kaufman was born in Krakow in 1926. She and her mother were the only two family members to survive the death camps out of 70 family members. Years later, Dana shared with Father Morley that she knew of a very special woman who was a Holocaust survivor. 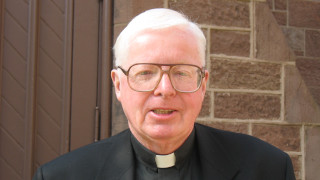 Father Morley, Professor Emeritus in the Department of Religion, was actively involved in Christian-Jewish Relations. Among his many appointments, he served on the Holy See's Commission for Religious Relations with the Jews and the Holocaust Committee of the U.S. Holocaust Memorial Museum in Washington D.C. He collaborated with Monsignor John M. Oesterreicher on numerous projects and introduced a Holocaust course to the University's curriculum.

"Father Morley asked me to give a lecture in his classroom. That led to Monsignor Oesterreicher asking to borrow my prison dress for a Holocaust service he was conducting. Sister Rose Thering was in attendance at the service. When I saw my prison dress hanging on an altar of a Catholic church, I was so overwhelmed and I realized that I belonged in this place. This culminated in many years of my working with Seton Hall," she shared.

The Sister Rose Thering Fund presented Father Morley with its Humanitarian of the Year Award on April 14, 2002 at its Evening of Roses gala.

Forming a powerful bond and visiting each other through the years, Kaufman still recalls "Father Morley coming to New York in 1981 for a book-signing and presenting me with his new book 'Vatican Diplomacy and the Jews During the Holocaust 1939-1943,' which had just been published in 1980."

In this time of coronavirus, Kaufman learned of her blessed friend's passing while keeping alive both old and new traditions of faith with her children and grandchildren throughout the country during a remote Passover Seder. She still feels his impact on her life.

"He became a very close friend and I'm so grateful to him for his courage, his caring and for him bringing me to Seton Hall," she shared.