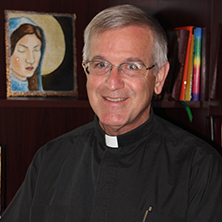 Father William McDonald, during his year of college studies, spent some time in formation with the Salesians of St. John Bosco, eventually earning his degree in Humanities from St. Patrick's College, Mountain View, CA in 1985. He then received priestly formation at the North American College, Rome, earning an S.T.B. (1988) and an S.T.L. (1990) in Spirituality from the Pontifical Angelicum University.

During his 25 years of priestly service, he has done extensive parish ministry (English and Spanish) and has served as vocation director and on the personnel board in the Diocese of Stockton, CA. He has also had the opportunity to serve as a missionary and has been involved with teen and young adult ministry. While pastor at St. Stanislaus Parish in Modesto, CA, he spearheaded the fundraising and planning for the eventual construction of the new church built there.

Throughout his years of service as priest, he has been involved being a spiritual director for priests, sisters and lay people and has enjoyed preaching both in the parish and through conducting parish missions for other parishes in the US.

In Spring 2014, Father McDonald was appointed to the Formation Faculty of Immaculate Conception Seminary, where he also teaches courses in Pastoral Theology.