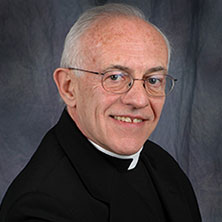 After seminary studies at the Gregorian University in Rome, I spent seven years in parish work in the Archdiocese of Newark, during which time I obtained an S.T.M. in American Christianity from Union Theological Seminary in New York City. I began teaching at Immaculate Conception Seminary School of Theology as an adjunct in 1974. From 1976 until 1981, I pursued the doctorate in Church History at the Pontifical Gregorian University in Rome. My graduate studies at the Gregorian focused on the interaction of the Holy See and the Catholic Church in the United States and the diplomatic interaction of the Holy See and the United States government. In 1981, I began full-time teaching at the Seminary, and continued until my retirement from teaching in 2020, with the exception of the period from 1988 to 1994, when I served as Executive Director of the Seminary Department of the National Catholic Educational Association in Washington, DC.  My research interests focus on the history of Catholicism in America, the art and architecture of American church buildings, and the diplomatic activities of the Holy See.