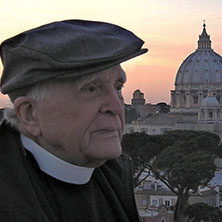 The Reverend Dr. Paul Haffner is Adjunct Professor of Catholic Studies at Seton Hall University. He studied physics at Corpus Christi College, Oxford University, and after seminary studies at the Venerable English College and the Pontifical Gregorian University, Rome, he was ordained priest for the diocese of Portsmouth in 1981. His doctorate from the Gregorian University focused on the relation of faith to modern science.

Dr. Haffner is also a lecturer at the Pontifical Gregorian University and the Duquesne University Italian campus in Rome; President of the Stanley Jaki Foundation; theological and editorial director of Gracewing Publishing; a member of the Pontifical International Marian Academy; and a regular contributor to Inside the Vatican magazine. He has authored more than 30 books and 150 articles on philosophical and theological themes, and many of his books have been translated into other languages, including Italian, Spanish, Portuguese and Russian.

Dr. Haffner teaches the course, The Popes and Science, which introduces students to Papal teaching on the relations between Christian faith and natural science and serves as a foundation for further study of faith and reason. An analysis of historical data shows that modern science developed in the Medieval period against a background of Christian faith in the creation. Pope Sylvester II was a brilliant mathematician whose discoveries led to the number system we use today. Pope Innocent III founded a hospital in Rome which was the basis for the modern city hospital system world-wide. The civil calendar in use today owes its existence to Pope Gregory XIII. The Pontifical Academy of Sciences and the Vatican Observatory are both highly-respected institutions which continue to contribute to scientific progress. The course goes on to illustrate how four modern Popes have contributed in a special way to the dialogue between faith and science: Pope Pius XII who renewed the proofs for the existence of God in the light of modern science, Pope St John Paul II who reaffirmed the crucial importance of the dignity of the human person in science, Pope Benedict XVI who proposed the rational basis for creation in terms of the doctrine of the Logos, and Pope Francis who sees science in terms of an existential periphery to be evangelized.