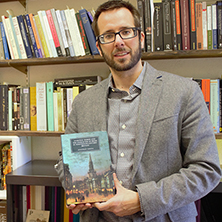 Jonathan Farina teaches undergraduate and graduate courses on nineteenth-century British literature, the novel, and critical theory, as well as the Honors Colloquia on the Ancient and Early-Modern Worlds. The author of more than 20 peer-reviewed articles and book chapters and 25 scholarly book reviews and omnibus review essays, he writes about the history of fiction as a form of knowledge. His first book, Everyday Words and the Character of Prose in Nineteenth-Century Britain (Cambridge University Press 2017; paperback 2019), earned Honorable Mention for the Sonya Rudikoff Prize for the Best First Book in Victorian Studies. It describes a repertoire of everyday language that underwrites what counted as knowledge for British writers of all kinds, including novelists and scientists. “Characterization,” it shows, was a historically specific mode of description that represented things other than fictional people and that aimed not to reproduce facts but to deviate from them—and yet still tell the truth.

A second book is well underway: Aformalism: Nineteenth-Century Literary Criticism and the Dispositions of Modern Knowledge recasts Victorian literary criticism as a rich repository of alternative, never-institutionalized forms of knowledge production rather than a mere genealogy of new criticism or other contemporary modes of interpretation. This project includes chapters on “awkwardness” as the constitutive affect of literary criticism; the problems with recognizing the “obvious” as knowledge; the Victorian stylistic conventions of “theory”; and the representation of "cool" reading as “knowledge work.”

Jonathan has delivered invited talks at Princeton, Columbia, Toronto, Rutgers, the Grad Center at CUNY, the New York Public Library, the Bronx Museum of the Arts, and elsewhere. And he has presented dozens of conference papers throughout North America and the UK.

A recipient of the Albert B. Hakim Faculty Service Medal, Jonathan’s service includes two consecutive two-year terms as president of the Northeast Victorian Studies Association, three years on the Delegate Assembly of the Modern Language Association, and three consecutive years as Chair of the Faculty Senate. He presently serves as co-chair of the University Diversity, Equity, and Inclusion Committee.