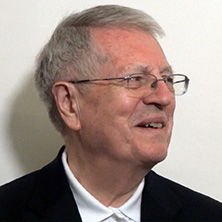 Dr. Bill Rusch of Yale Divinity School to Give Talk 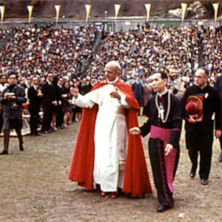 Monsignor John A. Radano was ordained a priest of the Archdiocese of Newark in 1965. Appointed to the faculty of Seton Hall University, he served in the Department of Religious Studies from 1965-1984, also as its chairman from 1977-1984, specializing in ecumenical studies.

During these years as a faculty member at the University, his many ecumenical activities included participation in the North American Academy of Ecumenists, with three years (1981-83) as Membership Secretary/ Treasurer, and co-director of an Ecumenical Studies Institute co-sponsored by Seton Hall University and Upsala College, which organized ecumenical lecture programs at both institutions (1973-1975). In addition, he participated in two international assemblies of the World Conference on Religion and Peace (Princeton, New Jersey, 1979, and Nairobi, Kenya, 1984), with the responsibility of organizing prayer sessions at those assemblies. He also served as member of the Pax Romana (a Catholic NGO) delegation at the United Nations (1975-79), and head of the delegation (1977-79). He attended, in an NGO capacity, the first UNO world conferences on Population (1974, Bucharest, Romania), and on Human Settlements (1976, Canada).

From 1984-2008, he served in the Pontifical Council for Promoting Christian Unity (PCPCU), Vatican City, and in 1985, Pope John Paul II appointed him as head of that Pontifical Council’s Western Section. He participated there in a number of the Catholic Church’s international bilateral dialogues with other world Christian communions, including those with Lutherans, Reformed, Baptists, Mennonites, Classical Pentecostals and Evangelicals. In 1985, the PCPCU named him liaison with the Commission on Faith and Order of the World Council of Churches, and member, in 1988, of the Joint Working Group between the Catholic Church and the World Council of Churches.

In 2018, Monsignor Radano was appointed by the Commission on Faith and Order, World Council of Churches, to the Editorial Advisory Board of the Faith and Order Papers Digital Edition.

Publications include:
Monsignor Radano is the Editor of the PCPCU’s Information Service (1985-2008). His articles have appeared in the New Catholic Encyclopedia (Jubilee Volume, the Wojtlya Years), the Dictionary of the Ecumenical Movement, Personenlexikon Ökumene, and in journals such as Midstream, Ecumenical Trends, The Journal of Ecumenical Studies, One in Christ, Religious Studies Review, Angelicum, Marian Studies, Catholica, Centro Pro Unione (semi-annual Bulletin), Priests and People, Messagero Cappucino and U.S. Catholic Historian. He has published numerous articles in L’Osservatore Romano and in a number of World Council of Churches publications, as well as contributing articles to books edited by others. These include "Willebrands, the Churches of the West, and the World Council of Churches; a Roman Catholic Assessment," in Adelbert Denaux and Peter DeMay, editors, The Ecumenical Legacy of Johannes Cardinal Willebrands (1909-2006). Leuven, Paris, Walpole, MA; Peeters, 2012, 187-209.

Msgr. Radano was invited by Fuller Theological Seminary, Pasadena, CA, to be the third (outside) reader for the Ph.D. dissertation of Karen Jorgenson Murphy ("'On Becoming a Christian'; the Fifth Quinquennium of the International Roman Catholic-Pentecostal Dialogue in Historical-Theological Perspective"), Spring 2013.

Msgr. Radano is a member of the 8th Round of the National Catholic-Reformed Dialogue, appointed by the Bishop's Committee for Ecumenical and Interfaith Affairs, United States Conference of Catholic Bishops, Washington, DC (2012-present).

Dr. Bill Rusch of Yale Divinity School to Give Talk