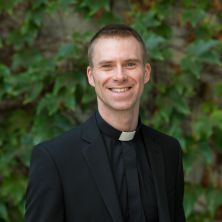 Born to Krystyna and Andrzej Tomczyk in Szczecinek, Poland, Father Pawel Tomczyk has an older sister, Agnieszka. Father Pawel began his studies in 2009 at the Theological Institute of the Missionaries of St. Vincent in Krakow, Poland. After completing two years of undergraduate studies in philosophy, he immigrated to the United States to continue his formation to the priesthood.

He obtained a Master of Arts in Theology with distinction from SS. Cyril and Methodius Seminary in Orchard Lake, MI. During his stay in Michigan, Father Pawel discovered his interest in Christian ethics, which led him to the writing of his master’s thesis on the morality of lying. In Fall 2013, he was transferred to the Theological College Seminary in Washington, DC, where he completed his formation to the priesthood and earned his doctorate in moral theology two years later.

Father Pawel was ordained a priest on May 23, 2015, for the Diocese of Paterson. He currently serves on both the academic faculty and the formation faculty of Immaculate Conception Seminary School of Theology and assists in the work of evangelization at St. Paul Inside the Walls, the Catholic Center for New Evangelization, in Madison, NJ.