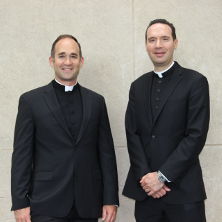 Theological Framing of the Universe's Origins 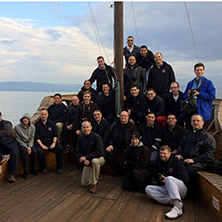 Scripture Comes to Life for Seminarians in Holy Land

Rev. James Platania was in the business world of New York after graduating from Boston University’s School of Management. He became fascinated with Catholicism while attending the Church of Our Saviour on Park Avenue and in 2007 he left his career to study philosophy and discern a call to the priesthood. Two years later he traveled to Rome to study theology at the North American College and was ordained a priest in 2013. He completed a licentiate in Biblical Studies and joined the Seton Hall community in 2016. He later went back to Rome to study the narrative approach to Scripture under Jean-Pierre Sonnet, S.J., while serving as a university chaplain at St. John’s Rome Campus. He returned to Seton Hall in 2022 when he was named Director of the Monsignor James C. Turro Seminary Library and adviser to seminarians discerning a call to the priesthood.

Rev. Platania primarily offers courses in the Old Testament. He believes that the Bible is a work of literature that tells a unified story leading to Christ. He is particularly interested in the poetics of biblical narrative and the ways in which the biblical narrator crafts the storyline. His courses emphasize the central role of the reading process through which this drama unfolds. For this end, he aims to study the Bible within the inherent rules which regulate the transfer of meaning from narrator to reader. He is also interested in how ancient biblical laws, narratives, and poetry are relevant to the modern reader today.

Theological Framing of the Universe's Origins

Scripture Comes to Life for Seminarians in Holy Land