In late 1953 he underwent a severe tonsillectomy that deprived him for ten years of the effective use of his vocal chords. This obliged him to suspend his teaching activity, and in his words “condemned to write”. In 1955 he earned a master’s degree and in 1957 a Ph.D. in physics from Fordham University in New York, having as his dissertation advisor, Victor F. Hess, the Nobel laureate discoverer of cosmic rays. In 1960 he moved to Princeton with a fellowship from Seton Hall University and in 1965 joined the Department of Physics faculty of Seton Hall where he went on to attain the rank of Distinguished University Professor of Physics in 1975. Father Jaki was a visiting professor at universities all over the world and delivered the prestigious Gifford Lectures at the University of Edinburgh. During the academic year 1966-67, he was a visiting scholar at the Institute for Advanced Study in Princeton. He lived in or near Princeton for the rest of his life, mainly because of the fact that Princeton has excellent libraries.

In 1966, Father Jaki published his first important work, The Relevance of Physics, and then went on to write and publish more than forty books over a span of more than forty years, covering a wide range of topics, dealing with the history of science, cosmology, theology, ethics, philosophy and biblical studies. In 1987 he was awarded the Templeton Prize for “his immense contribution to bridging the gap between science and religion, and his making room, in the midst of the most advanced modern science, for deep and genuine faith.” In 1990 he was appointed an honorary member of the Pontifical Academy of Sciences by Pope John Paul II. In 2009, Father Jaki presented his last lecture at the Casina of Pope Pius IV, headquarters of the Pontifical Academy of Sciences. While on his way back home to the United States, Father Jaki pass away on April 7, 2009 in Madrid, Spain.

It is on the ultimate success of such a quest [for a TOE] that Gödel's theorem casts the shadow of judicious doubt. It seems on the strength of Gödel's theorem that the ultimate foundations of the bold symbolic constructions of mathematical physics will remain embedded forever in that deeper level of thinking characterized both by the wisdom and by the haziness of analogies and intuitions. For the speculative physicist this implies that there are limits to the precision of certainty, that even in the pure thinking of theoretical physics there is a boundary present, as in all other fields of speculations. 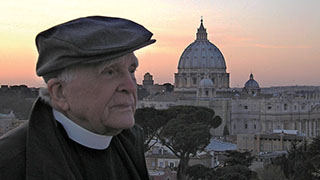 Father Stanley Jaki, a Great Mind that `Shaped the World`

Stanley Ladislas Jaki was a world-renowned author, physicist, philosopher, and theologian. Fr. Jaki joined the Department of Physics faculty of Seton Hall in 1965  where he went on to attain the rank of Distinguished University Professor of Physics in 1975.