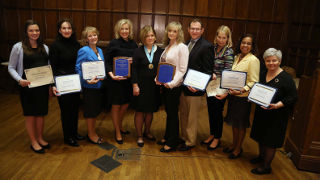 Professor Phyllis Shanley Hansell, Ed.D., R.N., FNAP, FAAN, recently received the prestigious R. Louise McManus Medal. The award is the highest honor bestowed by the Columbia University Nursing Education Alumni Association and was awarded to Hansell for her many scholarly achievements and many distinguished contributions that have advanced the nursing profession.

The McManus Medal was named after the first nurse to a earn a Ph.D. in the field of nursing, who created the Institute for Nursing Research at Columbia University and developed a Patient Bill of Rights. The award was presented at the 55th Annual Isabel Maitland Stewart Conference on May 4, 2018 in the Millbank Chapel at Columbia University.

Among her numerous accomplishments, Hansell is a past recipient of the Bishop Bernard McQuaid Medal for Distinguished University Service at Seton Hall. She is also a Fellow in the American Academy of Nursing and Fellow and Distinguished Practitioner in the National Academies of Practice.