The College of Nursing Sponsors Its First Young Alumni Reunion 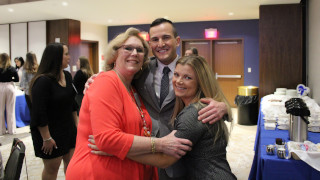 The first College of Nursing Alumni Reunion dedicated to celebrating the achievements of young nursing alumni was held during the spring 2019 semester. An enchanting evening was enjoyed by young alumni and faculty alike, who were thrilled to welcome back these influential graduates who are now practicing as registered nurses. In the atrium of Bethany Hall, a magical and uplifting homecoming took place. It was the first time since graduation that many of the 90 graduates have returned to Seton Hall. Some were recent graduates and others had been gone for over a decade. For the faculty, it felt as though our children had come back home.

As expressed by Dr. Katherine Connolly," The students and faculty go through so much together during the years of nursing study. It is wonderful to see you and hear of your success and accomplishments in the field of nursing. We are so proud of you!" Dr Colleen Carrington, stated in her welcome, that "Home is where one starts from, and therefore, Seton Hall College of Nursing is home. The alumni were welcomed back by Dean Marie Foley along with several faculty members and Deans from the College of Nursing.

The inspirational guest speakers were what truly captured the hearts and souls of everyone gathered. Marianna Triolo '17, having been diagnosed with stage four ovarian cancer in the last year of the nursing program enlightened and mesmerized the audience with her perspectives of life as a patient. The lessons she taught were beyond any classroom instruction. Marianna shared her insights as a young patient with a serious diagnosis. Remarkably, she now works with oncology patients herself at Yale New Haven Medical Center, the hospital where she received treatment and underwent numerous surgeries. She spoke with courage about the possibility of her own mortality. She believes that every day she is helping others as a nurse, is another day she is not a patient herself. The room was silent as she spoke, as her words touched so deeply. Marianna was honored by faculty and peers with a standing ovation as she graciously accepted the award for Most Inspirational Nurse.

Anthony Nickele '15, who has devoted his work to underserved populations, was recognized for Outstanding Servant Leadership in Nursing. He shared his stories, some in a lighthearted way, about his nursing journey and his time at Seton Hall where he developed an appreciation for the importance of servant leadership. Anthony has packed a lifetime of nursing into the last four years since graduating with honors in 2015. After graduation, Anthony began his career by heading straight to the South Bronx, jumping into the trenches of nursing at Bronx Lebanon Hospital in the Emergency Department. After spending his initiation year into nursing in the South Bronx, Anthony returned home to Detroit where he began his work in Detroit Receiving Hospital. He is currently head nurse in the trauma intensive care unit where he is a rigorous patient advocate. The path that Anthony has taken in nursing has influenced his evolution into a nurse deeply committed to the underserved and those that need his innate skills of service and advocacy most. He lives the Seton Hall Mission for Servant Leadership every day.

The keynote speaker, Dr. Bryan Price, Executive Director of the Buccino Leadership Institute and West Point Graduate, spoke of his life as the son of a nurse. He also shared his experiences in Afghanistan and Iraq where he was deployed on several tours of duty serving as a Lieutenant Colonel in the US Military. He spoke of the bravery of the nurses he worked with and captivated the room with his exciting stories where military nurses were exposed to great dangers, but never once shied away from the care of their patients. He recognized the similarities and the common bond those in the military and nurses share. He received an extremely warm show of appreciation from the 100 nurses present in the room.

Past presidents of the Seton Hall Student Nurses Association (SNA) were recognized for their hard work and dedication to the College of Nursing, six of whom were in attendance at the event along with others who served as elected members of the SNA board. Past presidents in attendance included Eddie Cuza, Kelly Fristensky, Kirsten Anderson, Melissa Cologrosso, Taylor Caridad and Molly Gardner. As presidents, these young leaders organize the Annual Health Fair on the Green, a major undertaking and an important representation of the College of Nursing within the Seton Hall community.

The class of 2022 nursing leadership students from the inaugural class of the Buccino Leadership Institute were also in attendance, excited to meet College of Nursing graduates that have gone before them. The nursing leadership students were recognized for their outstanding performance in Pirates Pitch, an entrepreneurship contest sponsored by the Center for Entrepreneurial Studies, Stillman Business School for their innovative idea to update patient call bell systems in hospitals. The students went on to represent Seton Hall in the college statewide competition, UPitch, proving that nurses can be entrepreneurial. The College of Nursing was delighted to have Interim Provost, Dr. Karen Boroff present who was most impressed with the uplifting nature of the event. The Buccino Leadership Institute is the brainchild of Dr. Boroff, who worked tirelessly to facilitate the university-wide launch of the institute in the Fall of 2018.

Importantly, the event was made special by the extraordinary energy the College of Nursing alumni, filling the room with excitement and joy. As organizers of the event, Drs' Carrington and Connolly said the reunion was a reminder of how very much these graduates mean to them. This was more than your usual alumni reunion. It was a spiritual embracing of all that is nursing: healing, caring, sacrifice and hard work; all that is life.