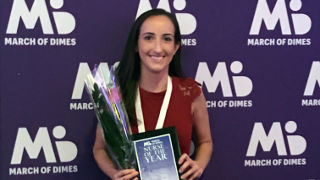 Jenna Mason, M.S.N. '15, was honored on November 14 with a March of Dimes Rising Star Award for her impressive array of leadership initiatives done in a short time after graduating from Seton Hall's Clinical Nurse Leader (CNL) program. Beyond the honor of being invited to the gala itself (award winners are not announced prior to the event), Mason felt especially privileged to accept the award in the presence of her mentors, Clinical Associate Professor Pamela Galehouse, Ph.D., director of the Clinical Nurse Leader Program, and Clinical Associate Professor Maryanne Barra-Schneider, D.N.P. Her achievement is a testament not only to the passion and commitment that graduates of the College of Nursing apply to their work, but also to the many potential opportunities that can be created as a Clinical Nurse Leader, a role that is becoming more prevalent in modern healthcare.

Mason began as a staff nurse with Hunterdon Medical Center in Flemington, NJ immediately following her capstone project as a requirement of her program. In her current position as a clinical nurse leader, a role to which she was promoted after her second year, she has utilized her practical experience to inform the administrative direction for the 30-bed, inpatient surgical floor, where she has served during her three-year tenure at the Center. In this time, she has been responsible for staff and patient education, supporting the nursing staff with clinical expertise, data collection, and various areas of evidence-based research.

The March of Dimes Rising Star Award nomination came from Mason's colleagues for the development and implementation of multiple significant initiatives that have greatly improved patient outcomes and increased elements of safety for both patients and staff. Foremost in her accomplishments was a project design that successfully decreased the colonization rates of bacteria in high risk patients (MRSA 1.2 to 0.3 and VRE 1.5 to 1.0 per 1,000 patient days) from December 2017 to May 2018, subsequently leading to an initiative which will reduce $30,000 of budgetary spending per year. Additionally, she created and implemented education for staff nurses regarding pressure injury (ulcer) prevention, with a concentration on device-related pressure injuries, emphasizing the importance of comprehensive skin assessments and documentation. As a result, from January 2018 to November 2018, there were zero device-related pressure injuries on the unit. The March of Dimes Rising Star Award was also attributed to Mason's involvement on multiple committees throughout the hospital, embodying strong leadership skills, facilitating positive change, and demonstrating true dedication to her work, alongside other professional milestones and accomplishments.

Mason's path to nursing began after first beginning as an undergraduate major in business, then subsequently environmental studies at Seton Hall. According to Mason, "My roommates, who were nursing majors, would come home and tell me about the things they were learning in class and practicing in clinical. I always loved science and helping people, and one day after hearing about their experiences, I realized I'd rather be doing what my roommates were doing." She immediately applied to the CNL program, with the advantage of taking her prerequisite classes while finishing her Bachelor of Arts in Environmental Studies.

When asked what it was about the program that attracted her, Mason was quick to observe that nursing requires the ability to work both collaboratively and independently in an environment that necessitates critical thinking. She was initially drawn to the M.S.N. aspect of the program, but the more she learned about being a CNL, the more she became interested in and passionate about the role. Mason was particularly inspired to know that she would be prepared beyond a traditional nurse's role and could eventually advance as a masters-prepared advanced generalist with specialized leadership skills in the clinical nurse leader role. As someone who embraces the opportunity to enhance her leadership skills, she states that, "You need to be the one to enact change." She adds, "I ended up exactly where I wanted to be. Seton Hall set me up for success."

Among her many other endeavors, Mason is also working on creating a New Jersey chapter of the Clinical Nurse Leader Association with her colleagues. Those interested should contact cnlanjofficial@gmail.com.