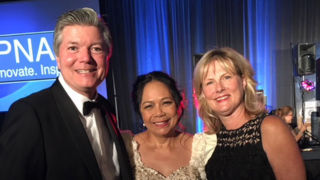 After years of hard work and dedication to her profession, Madelyn Yu, M.S.N. '03, nurse manager for Saint Barnabas Medical Center, was appointed as president of the Philippine Nurses Association of America, Inc. (PNAA). Taking place at the Hyatt Regency in Jersey City, NJ, Yu graciously accepted the position in the presence of her Seton Hall professor and long-time mentor, Dr. Wendy Budin. Beyond the title, however, the accomplishment was imbued with deep personal significance for Yu.

The PNAA was originally founded in 1979 to advocate for Filipino nurses who experienced victimization in the workplace during their immigration to the United States. Chief among the concerns were issues related to contracts that were unscrupulously altered from the time they were signed in the Philippines to the nurses' arrival on American soil. Upon signing new contracts, nurses were subjected to substandard working conditions with few options beyond either continuing or being forced to return to their homeland. Those that chose to remain often faced heavy fines for breach of contract when they could no longer accept their untenable situations.

In addition to individual advocacy, the PNAA now supports its members in efforts such as medical/surgical outreach and structural rebuilding in natural disaster areas back in the Philippines as well as other parts of the world. The organization also advances nurse education and leadership training, including supporting annual scholarships to B.S.N./master's/doctoral students.

One might ask how Yu came to be the leader of such a notable and impactful organization. As a full-time nursing director at the then Newark Beth Israel Medical Center for cardiac services, it was no easy task to add education on top of other prior responsibilities, including raising a family. She enrolled in Seton Hall University and completed her M.S.N. in Nursing Administration in 2003. "I went to class after work once or twice a week in order to learn everything I could about nursing leadership," said Yu. "I had been a practice nurse for many years, but had little experience in areas of administration. I needed to know how to financially budget and plan for my department, manage a team and establish protocols and procedures for the nursing unit."

Yu went on to receive the Sara Ericksson Award for leadership upon graduation. She believes that the Seton Hall education provides not only integral leadership training, but the opportunity to fully explore and employ your leadership talents. The fact that the collegial Seton Hall community reminded Yu of the University of the Philippines may have been a motivating factor in pursuing her advanced degree at the University. Now, as the President of the PNAA, her mission is similar to that of her alma mater: make a difference.