UN Secretary-General Guterres to Address the Class of 2022 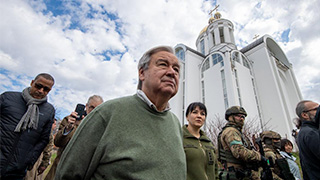 Seton Hall University will celebrate its 166th baccalaureate commencement ceremony on Tuesday, May 24, 2022, at the Prudential Center, 165 Mulberry Street in Newark, N.J. at 9 a.m. Delivering the commencement address will be His Excellency António Guterres, United Nations Secretary-General. The ceremony will be live-streamed on the University’s website.

The Secretary-General will receive an honorary degree for his lifelong dedication to fostering peace and social justice, which are among the ideals and aspirations to which Seton Hall is committed. He epitomizes the University’s mission of servant leadership in a global society. His exemplary service at the helm of the UN includes investing in young people and amplifying their meaningful contributions as change-makers confronting many of the world’s crises and challenges.

“Seton Hall is fortunate to host Secretary-General Guterres as commencement speaker at this critical moment in world history,” said Joseph E. Nyre, Ph.D., University President. “His heroic efforts to foster peace and justice provide a powerful example for our graduates, who are preparing to take their first steps into a world that urgently needs their special gifts.

“I am confident His Excellency’s words will be rich in wisdom, insight and inspiration,” President Nyre added. “We pray for the Secretary-General’s successful intercession as he works with Ukrainian President Volodymyr Zelensky and leaders around the world to support Ukrainian refugees and bring an end to the war. We are proud to bestow an honorary degree on the Secretary-General for everything he has done — and is continuing to accomplish — in the name of worldwide peace and harmony.”

“Seton Hall has had a special relationship with the United Nations community since the University founded the School of Diplomacy and International Relations. We are thrilled to welcome Secretary-General António Guterres to Seton Hall, just as we have done with his predecessors Ban Ki-moon and Kofi Annan. His Commencement address and honorary degree signify the high regard with which the UN and Seton Hall hold our next generation of global servant leaders in shaping a more equitable future for all,” said Courtney B. Smith, Ph.D., Dean of the School of Diplomacy and International Relations.

The ninth Secretary-General of the UN, Guterres took office on January 1, 2017. Having witnessed the suffering of the most vulnerable people on earth, in refugee camps and in war zones, the Secretary-General is determined to make human dignity the core of his work, to serve as a peace broker and bridge-builder to promote reform and innovation, and to engage with youth.

Prior to his appointment as Secretary-General, Mr. Guterres served as United Nations High Commissioner for Refugees (UNHCR) from June 2005 to December 2015, heading one of the world’s foremost humanitarian organizations during some of the most serious displacement crises in decades. The conflicts in Syria and Iraq, and the crises in South Sudan, the Central African Republic and Yemen, led to a huge rise in UNHCR’s activities as the number of people displaced by conflict and persecution rose from 38 million in 2005 to over 60 million in 2015.

Before joining UNHCR, Mr. Guterres spent more than 20 years in government and public service. He served as prime minister of Portugal from 1995 to 2002, during which time he was heavily involved in the international effort to resolve the crisis in East Timor.

Mr. Guterres was born in Lisbon in 1949 and graduated from the Instituto Superior Técnico with a degree in engineering. He is fluent in Portuguese, English, French and Spanish. He is married to Catarina de Almeida Vaz Pinto, Deputy Mayor for Culture of Lisbon, and has two children, a stepson and three grandchildren.