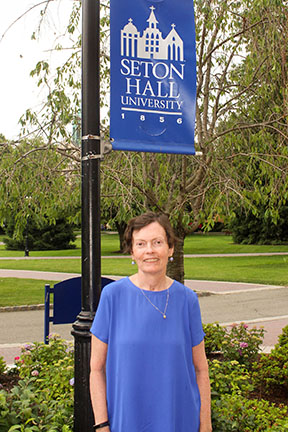 Student service has always been at the forefront of this Seton Hall alumna's career.

A writer, professor, mentor, advocate, leader and mother, Agnes "Tracy" Hooper Gottlieb '75 has served the Seton Hall student body and community for 31 years. This year, she will step down from her position as Vice President for Student Services and return as a full professor in fall 2020.

Feeling "At Home"
Gottlieb's story with the University began in 1970 when she visited her sister, who was a nursing student, on campus during Columbus Day weekend. The moment she took that first step on campus she said she quickly "just fell in love with it" and felt "at home."

"There's no better explanation for it," Gottlieb said. "I just walked on campus and felt like this was where I wanted to be."

Gottlieb and her sister weren't the only ones in their family to attend Seton Hall – more than 20 members of their family have either worked, taken courses or earned their graduate and/or undergraduate degrees from the University since 1937.

She enrolled as an undergraduate student at the University in 1971 and received her bachelor's degree in communication in 1975. After graduation, she immediately began her career as a journalist at The Associated Press (AP) in Newark, where she served as the New Jersey broadcast editor, the day editor and the court correspondent.

Gottlieb then met her husband, Henry, at the AP, and the couple moved to Brussels, Belgium, in 1980. While in Europe, she was the editor of the Commerce in Belgium magazine published by the American Chamber of Commerce. In addition, she did freelance work for The New York Times and for several travel guides and books on Belgium.

Four years later, Henry was transferred to report for the AP on the state department in Washington, D.C. Upon their return to the United States, Gottlieb went back to school at the University of Maryland where she received her master's degree in journalism and her Ph.D. in public communication.

Gottlieb said later on she and her husband felt it was time to change the direction of their lives, as her husband kept traveling while she was continuing with her graduate coursework and raising two children. She returned back to her "home" at Seton Hall in 1988, but this time, as a full-time lecturer in journalism.

The Voice for Students
While serving as a professor, Gottlieb said the best part about her job was being a faculty adviser to The Setonian, the University's student-run newspaper, and working closely with students. "Being an adviser to the newspaper really gave me the opportunity to show these students what journalism is really all about," she said. "It allowed me to help them develop professional habits for the industry." She added that to this day, she remains in touch with some of her former students.

Gottlieb was then promoted to full professor, and shortly afterward, was appointed Dean of Freshman Studies in 2001. Since then, she has worked to ensure that the "Seton Hall experience for every student is remarkable from the very start of their college careers."

This new responsibility didn't stop Gottlieb from writing. She contributed to the "What's New @ SHU" e-newsletter and wrote on parental issues from the perspective of both a dean and a mother. She also subsequently served as the associate provost.

Her mentorship to students and service to the University earned her the Emma G. Quartaro Woman of the Year Award in 1999, the Seton Hall Adviser of the Year award in 2000 and the McQuaid Medal in 2009.

In 2012, a new division for student services was created, and Gottlieb was appointed to serve in this new role as Vice President of Student Services. This division includes Student Affairs, Freshman Studies, the Educational Opportunity Program, ROTC, Academic Support for Student Athletes and the federal TRIO program. Additionally, Gottlieb was also responsible for overseeing the departments of Community Development, Housing and Residential Life, Counseling and Health Services, the Career Center, Disability Support Services, Public Safety and Security and the Campus ID office. 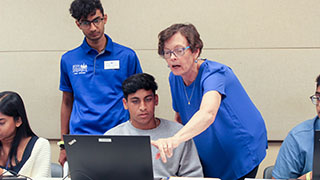 "I've paid attention to the life of a student," Gottlieb said. "I've wanted to make sure that every student's experience here at Seton Hall is a positive one, starting from the very first day they arrive on campus. Every year, Pirate Adventure has been an important day in my life—I am welcoming a new incoming class into our Seton Hall community."

Her continuous efforts to provide the best freshman-year experience for students earned her the 2014 Outstanding First-Year Student Advocate Award from the University of South Carolina's National Resource Center for the First-Year Experience and Students in Transition.

She even served as an academic adviser to some students, like Katherine Yaguana-Rodriguez, a rising junior social and behavioral sciences major. "Dr. Gottlieb has always put the students first," Yaguana-Rodriguez said. She added that during her first two years as a first-generation college student, Gottlieb not only guided her in the right direction, but also helped her boost her confidence as a college student.

"Dr. Gottlieb has always been a voice for Seton Hall students regardless of their grade level, GPA, major, financial status and so on," said Robin Cunningham '78, former associate vice president and dean of freshman studies and special academic programs who will succeed Gottlieb in the interim.

"She has worked tirelessly to create an environment on this campus where all students feel validated, where they can receive a meaningful education and where they can be respected by all members of the campus community," Cunningham said. "She accepts all students no matter where they are while nudging them to become something better. We will miss her."

"Without her, I wouldn't be where I am today," Yaguana-Rodriguez said. "She's there for everybody."

Back to the classroom
Before returning to the University, Gottlieb will take a one-year sabbatical. She said she plans to spend this time researching and preparing for her future classes.

"I'm going to have a lot of homework to do," Gottlieb said. "My discipline has changed enormously, and I need to prepare to go into the classroom and teach the students the best that I can and give them what they need: cutting-edge material. I'm excited about that idea—I get bored easily. A new challenge is a good thing for me."

Gottlieb has written and published dozens of scholarly articles on journalism throughout her career. She has given several presentations on the use of ePortfolios, summer reading and academic advising. In addition, she is the author of three books, two of which she co-authored with her husband and their close friends: Women Journalists and the Municipal Housekeeping Movement; 1,000 Years, 1,000 People; and 1,000 Things to Love About America: Celebrating the Reasons We're Proud to Call the U.S.A. Home.

Reflecting on all her years at Seton Hall, Gottlieb said she has always put the idea of the student in front of her. She also believes that she's left the Division of Student Services in a good place.

She said, "I feel like I've made a positive mark on our campus. I have a great team, and together, we have made good decisions that helped move the University forward. I'm leaving my division in a very good place with great leaders who are smart and are good decision makers. Having said that, I'm looking forward to this next chapter in my Seton Hall life."