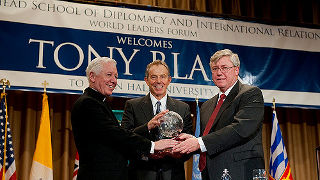 On Tuesday, February 3, Seton Hall students, faculty and community members filled the Walsh Gymnasium to hear an address by former British Prime Minister Tony Blair. “Thank you so much,” he said in response to a standing ovation, “That's not what I'm used to.”

Mr. Blair came to speak as part of the Whitehead School of Diplomacy and International Relation's World Leaders Forum. The program, which has brought leaders such as Shimon Peres, Mikhail Gorbachev, Kofi Annan, and Lech Walesa to campus, is designed to promote discussion on critical global issues.

Throughout his address, Mr. Blair asserted that cooperation was the solution to the world's three toughest challenges: the economy, the environment and security. He said that people must work together, “not just in traditional alliances, but in ones that bring together the developed and developing world”.

Mr. Blair stated that there is “virtually nothing more important” for President Barack Obama than to “get the right strategic alliance with China." On the environment, he said, "If we shut down the whole of the U.K. tomorrow so we had zero emissions, the growth in China would make up for it in 18 months; their population would grow by more than the whole of Britain's in 18 months."

He also warned that the United States must be wary of the entire Middle East, noting that there is “nothing more urgent” than resolving the Israeli-Palestinian conflict to achieve peace in the region. Suggesting an alternative to a purely military-solution, Mr. Blair said that: "This security threat cannot be dealt with by conventional means." Mr. Blair is currently a special envoy to the Quartet, an international effort to secure peace in the Middle East. 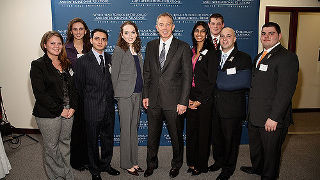 Mr. Blair urged students to adopt a set of “global values” that includes a belief in freedom, democracy, justice, and the power of community. He claimed that values are the only way our world can go forward. “It's not simply the sense of wanting to assume responsibility. It's a belief there is something more important than ourselves."

He ended his speech on an optimistic note, acknowledging that although the 21st century was a time of great challenges, it was also a time of “hope and possibility”. The audience responded with a warm standing ovation.

After taking questions from the audience, Mr. Blair met with a group of Whitehead students for an informal discussion. Before sitting down, he made sure to go around the room and shake hands with each individual. One student asked about the influence of faith on his work. Mr. Blair replied that as a public servant, he wouldn't “leave the room” to ask God if he should vote for “this or that” but that having faith gave him “serenity” even while making tough decisions. 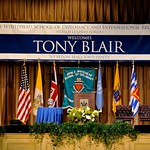 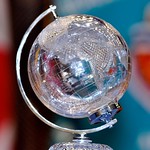 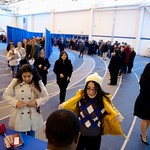 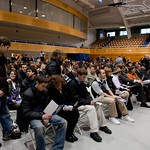 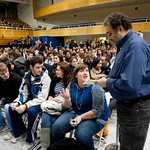 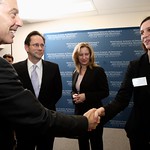 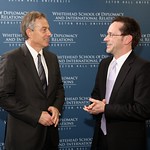 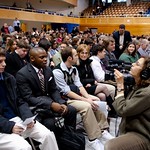 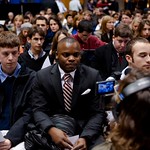 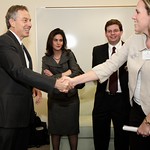 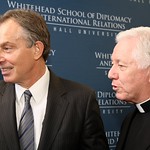 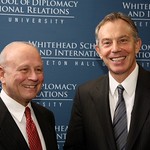