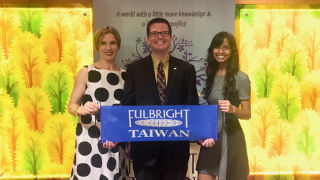 This past year found three Seton Hall Pirates in Taiwan as Fulbright Scholars.

With the support of the United States government and through binational partnerships with foreign governments, the Fulbright Scholarship Program sponsors U.S. and foreign participants for exchanges in all areas of endeavor, including the sciences, business, academe, public service, government, and the arts and continues to increase mutual understanding between the people of the United States and the people of other countries.

Law Professor Margaret Lewis spent the 2017-18 academic year as a Senior Fulbright Scholar at National Taiwan University College of Law, Taiwan's preeminent law school. As an expert in Chinese law, she regularly appeared in national and international media outlets during the year such as The New York Times, Los Angeles Times, Washington Post, the Hong Kong Free Press, AP, AFP, Fox News and CNN. You can read more about Professor Lewis and her work in this feature article "Seton Hall Law Professor Presented with Fulbright Grant."

Andrew Paulsen earned his M.A. in Educational Leadership, Management, and Policy from Seton Hall University in 2014. For the past six years, Andrew has taught math at East Side High School in Newark, NJ, the largest comprehensive high school in the Newark Public Schools. Paulsen traveled throughout Taiwan in 2018 as a Fulbright 'Distinguished Awards in Teaching' Scholar to research eastern mathematics pedagogy. You can read more about Paulsen in this feature article, "Education Alumnus Receives Fulbright Award."

Dominique Fortes graduated from Seton Hall in 2017 with a major in Accounting and a minor in Asian Studies. During the 2017-2018 school year, Fortes was a Fulbright English Teaching Assistant at Duo Nian Elementary School in Kinmen, Taiwan. Next year, she will be attending the University of Oxford to pursue a Master's degree in Modern Chinese Studies.