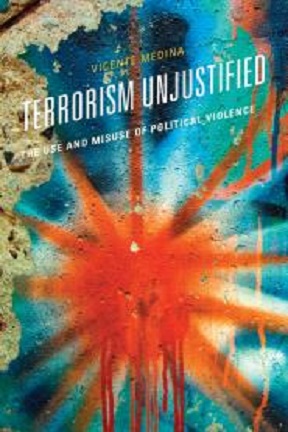 Dr. Vicente Medina will discuss his new and timely book, Terrorism Unjustified: The Use and Misuse of Political Violence (Rowman & Littlefield, 2015), on Tuesday, December 8th, from 5 p.m. to 6 p.m. in the Walsh Library Beck Rooms. The talk will be followed by a wine and cheese reception.

Dr. Medina's work challenges common misconceptions and excuses for extreme political violence with an unwavering reproach of terrorist actions. Countering such axioms as "one man's freedom fighter is another man's terrorist" and the "do whatever it takes" attitude toward counter-terrorism, he differentiates between justified political violence and unjustifiable terrorism. Surveying terrorism with both historical and contemporary examples, Dr. Medina dispels the relativism and emotional responses that have been used by some to justify terrorist attacks.

His work has already been praised by some of the best in the field of political philosophy. Dr. Jeff McMahan (White's Professor of Moral Philosophy, Oxford University) writes that "Terrorism Unjustified is a powerful and sustained defense of the view that terrorism can never be morally justified, even in the service of ends that are just. It contains detailed criticisms of more permissive views as well as a valuable discussion of the concept and history of terrorism. This book is a significant and admirable contribution to the philosophical literature on these vitally important issues."

Dr. Medina was interviewed by U.S. News and World Report on the politics around Syrian refugees and domestic terrorism, read more about it here »

Please join us for this provocative talk! This event is sponsored by the Department of Philosophy and the College of Arts and Sciences.