Catholic Social Teaching and The Maidan Revolution of Dignity: The Case of Ukraine 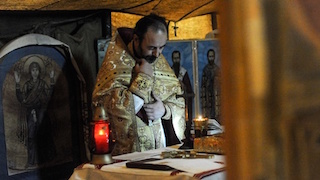 The Department of Catholic Studies & Slavic Club proudly present "Catholic Social Teaching & The Maidan Revolution of Dignity, The Case of Ukraine" on Thursday, April 14, 2016 at 6:30 p.m. in Fahy Hall, Room 236.

Ukrainian food will be served and all are welcome to attend.

About the Lecture
In his lecture, Professor Marko will consider how the rich tradition of Catholic Social Teaching, articulated in papal encyclicals, enumerated by the United States Conference of Catholic Bishops, and creatively present in the work of Venerable Servant of God Metropolitan Andrey Sheptytsky and the Catechism of the Ukrainian Catholic Church, Christ Our Pascha can contribute to the development of vibrant civil society in post Maidan Ukraine. It will be argued that the experience of solidarity that the Maidan revolution symbolized has much to offer the West. Civil society in the West is based so often on shared interests, often economic, rather than values which the Maidan Revolution offers such as community, self-sacrifice, interreligious dialogue, conversion, social activism, human dignity, and non-violent resistance in pursuit of the common good. The question of whether or not solidarity that was so experienced can continue to develop in a post Maidan period will be explored with special attention to the role of religion, especially the teachings and life of the Ukrainian Greek Catholic Church.

About the Speaker
Dr. Robert Marko was raised in the steel valley of Western Pennsylvania, who chairs and serves as professor of theology at Aquinas College. He has published in both scholarly and popular journals primarily in Catholic social teaching. A strong advocate of the gift of Eastern Christianity to the West, Professor Marko has taught Eastern social ethics at the Metropolitan Sheptytsky Institute of St. Paul University, Ottawa in summer 2004. He has served as a US Fulbright Scholar at the Ukrainian Catholic University in L'viv, Ukraine in both fall 2008 and fall 2015.

Contact Dr. Ines A. Murzaku, Chair of the Department of Catholic Studies, Ines.murzaku@shu.edu or at (973) 275-5845 and build your individually customized curriculum today.