Theatre-in-the-Round to open powerful play, "The Women of Lockerbie" 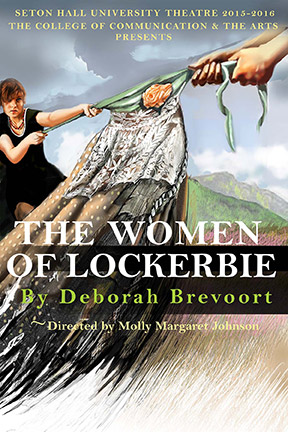 On February 18, the College of Communication and the Arts will open The Women of Lockerbie in the Theatre-in-the-Round, directed by Molly-Margaret Johnson. This award-winning play by Deborah Brevoort, is a beautiful study in grief at the hands of terrorism, and the triumph of love over hate. The play is set in the hills of Lockerbie, Scotland – the site of the bombing of Pan Am flight 103, the terror attack that killed all 259 people on board. The play focuses on an American mother from NJ who’s son was killed in the attack. This mother travels throughout Lockerbie, hoping to find and return her son’s remains to the US. While in Lockerbie, she meets a group of women engaged in a “laundry project” – as they fight the US government to obtain clothing of the victims so they may wash it, and return it to the families. These women are unwavering in their mission to turn an act of hatred into an act of love.

Theatre program Chair Professor Peter Reader had an emotional reaction when reading this play. Reader explained, “With the recent terrorist shootings in the last year, I felt a play about healing after violence was important to stage. This play examines the healing nature of empowerment – focusing on one group of women that came together to charge their community to act, to do something that would begin the healing process. A simple, charitable act turns into a powerful play of emotion and catharsis.”

In addition to the production that opens next week, the University is thrilled to welcome the playwright, Deborah Brevoort, to campus to take part in the annual conference on Women and Gender. A panel titled, “Gendering Responses to Terror: The Women of Lockerbie,” will feature both the playwright and the production director, and will be moderated by Reader.

This panel discussion will take place on Friday, February 12, at 1:30 p.m. in Stafford Hall, room 12. Information on the full conference can be found here »

The Women of Lockerbie will be performed in the Theatre-in-the-Round on the SHU campus on February 18-20 at 8 p.m. and February 21 at 2 p.m. The production is free and open to all. More information and the full production schedule can be found here »