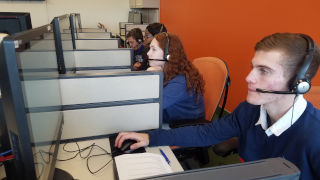 The most recent findings from the Seton Hall Sports Poll were featured in media outlets across the country, including The Wall Street Journal (front page), The Los Angeles Times, Yahoo, The Morning Telegraph (Tyler, Texas), Lancaster Online (PA), The Walla Walla Union-Bulletin, the Colorado Springs Gazette, The Record, Asbury Park Press, NJ 101.5, SmartBrief, and Darren Rovell on Twitter to his 2 million followers. Older findings regarding student-athlete compensation were featured in TIME magazine.

In The Wall Street Journal article, "NCAA Faces Showdown Over Player Compensation—and Future of College Sports," the authors note that

Public opinion on athlete compensation is shifting. Between 2013 and 2017, the share of Americans who said scholarships were sufficient compensation for college athletes dropped from 71% to 60%, according to Seton Hall University, which regularly polls the public on sports topics. Two years later, 60% believed college athletes should be allowed to profit from the use of their name, image or likeness while 32% said they shouldn't. This year's poll showed a majority still support that right, 56%, with opposition falling to 25%. The share of people who were undecided rose to 19% from 8%.

TIME magazine also looked at student-athlete compensation but published its story just before the latest Sports Poll findings on the subject were released. In "March Madness is Back. And It's Going To The Supreme Court Too," the article notes that

The movement to fairly pay players, which began in earnest decades ago as a talking point in academic and media circles, has gained popular support. A 2019 Seton Hall Sports Poll found that 60% of Americans believed that college athletes should be allowed to profit "image and likeness" endorsement money; in a 2017 poll, 60% said that scholarships were sufficient compensation for college athletes without their receiving pay above that. The issue is now reaching state legislatures, who have passed laws allowing athletes to profit off their name, image, and likeness; Congress, where several college sports bills, including a College Athlete Bill of Rights that would require revenue-generating sports to share 50% of their profit with the athletes from that sport after accounting for the cost of scholarships, have been introduced; and now, the Supreme Court.

In the Los Angeles Times, sports columnist Bill Shaikin wrote about the Sports Poll's recent findings on MLB rule changes. In "Tone is set for MLB and players' union CBA negotiations, and it isn't amicable," Shaikin cites the poll's most recent findings on the Designated Hitter. He writes

Zac Gallen is hurt. He is a pitcher, probably the best the Arizona Diamondbacks have, but he might start the season on the injured list because he suffered a stress fracture — while working on his hitting.

Gallen did not want to hit this season. The owners and the players agreed last year to use a designated hitter in every game, and they could have done the same this year.

The universal designated hitter is not even controversial any more. According to a Seton Hall poll released Thursday, "avid fans" prefer the DH in the National League: 57% approve, 17% disapprove and 26% did not care. Among the general public, 29% approved, 14% disapproved and 57% did not care. That last number should frighten both the owners and the players, but we digress.

The LA Times column was syndicated by the Associated Press and was featured in media outlets across the country, including Yahoo, The Morning Telegraph (Tyler, Texas), Lancaster Online (PA), The Walla Walla Union-Bulletin, the Colorado Springs Gazette and more.

Closer to home, The Record and the Asbury Park Press focused on the poll's findings regarding the perceived mental health benefit of sports on TV in the time of Covid with "Eye on the ball: How watching TV sports has helped mental health during the pandemic." In the article, both Marketing Professor Daniel Ladik Social Work Professor Juan Rios are quoted.

Glad sports are back on TV? You're not alone.

One year after the sports world came to a grinding halt, more than a third of Americans say that having sports back on their screens has had a positive effect on their mental health during the COVID pandemic, according to new poll released this week.

Among the general population, which includes self-described fans and non-fans, 39% said TV sports — even without spectators — was beneficial, according to the Seton Hall Sports Poll, a regularly published poll that has followed the impact of the pandemic on the industry since last April.

"Sports became one of the coping mechanisms," said Daniel Ladik, the poll's methodologist and a Seton Hall marketing professor. "We had to be at home. We had to self-isolate, and it was sure good to have something we enjoyed watching on TV — even if it wasn't the same experience that we're used to having."

Regarding the benefits of sports for mental health the story notes

Juan Rios, a licensed clinical social worker and director of Seton Hall's master of social work program, said it makes sense that respondents said sports help their mental health. Sports have a way of building community, whether within one's own household or through a network of die-hard fans, he said.

"Due to our isolation, there's a longing for community, and what sports has been is a sense of identity both within ourselves and our communities," Rios said. "I also have a collective community out there of folks who are equally enjoying this same moment I am experiencing at the same time — although we're not physically together."

The resumption of landmark sporting events such as the NCAA college basketball tournament also provides sports fans with a collective sense of relief, Rios added.

TIME magazine, "March Madness is Back. And It's Going To The Supreme Court Too" https://time.com/5947071/march-madness-college-athlete-pay/
LA Times, "Tone is set for MLB and players' union CBA negotiations, and it isn't amicable" https://www.latimes.com/sports/dodgers/story/2021-03-25/mlb-players-union-tone-cba-negotiations-isnt-amicable

The Record and Asbury Park Press "Eye on the ball: How watching TV sports has helped mental health during the pandemic"
https://www.northjersey.com/story/sports/2021/03/23/how-tv-sports-helped-our-mental-health-during-covid-pandemic/4767926001/

Releases from The Seton Hall Sports Poll along with questions and charted breakdowns of responses may be found at http://blogs.shu.edu/sportspoll/