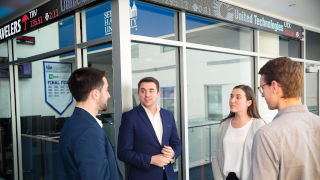 The Georgetown University Center on Education and the Workforce ranked 1700 public and private colleges and universities in the United States (that primarily confer bachelor's degrees) for return on investment over the course of a graduate's workforce career.

The Georgetown research found that Seton Hall alumni can expect to reap an additional $1.4 million in earnings during the course of their career by virtue of their degree, which placed the University at 175 among the 1700 schools – the Top 10 percent nationally.

When Georgetown last calculated in 2019, Seton Hall ranked at 191, within the Top 11 percent.

In its metric, Georgetown measured each school according to the Net Present Value of its degree over roughly the span of a student’s career – 40 years, which the researchers consider "to be the most comprehensive benchmark for judging the value” of a degree.

The Georgetown researchers defined Net Present Value (NPV) as "how much a sum of money in the future is valued today. This metric includes costs, future earnings, and the length of time it would take to invest and earn a specific amount of money over a fixed horizon."

Said another way, the education and credential a graduate receives at Seton Hall provides an additional $1.4 million in earnings over the course of that graduate's career and those earnings currently place the University in the Top 10 percent nationally among colleges and universities that predominately confer Bachelor's degrees.

"I am pleased but not surprised," said Seton Hall Provost and Executive Vice President Katia Passerini. "As I’ve said before, this earnings metric is significant because it captures educational return on investment (ROI) over the course of a career. Seton Hall is lauded with a drumbeat of regularity by ranking organizations across the United States. The University is regularly included in The Princeton Review's Best Colleges, as well as U.S. News & World Report – which this year ranked the University among the top third of all national universities; and The Wall Street Journal/Times Higher Education ranking, which this last year placed Seton Hall among the top 35 percent of the "Top Colleges and Universities" nationwide. But as I said, it does not surprise me that we placed even higher in an analysis that focused solely on ROI. Seton Hall graduates are well prepared, extremely focused and results oriented.”

In a 2019 ranking by PayScale Inc. ("the world's leading provider of on-demand compensation data and software"), Seton Hall was named among the top 12 percent of colleges in America for the mid-career salary of its alumni, $103,800. For the ranking, PayScale Inc. sampled data from more than 3.5 million full-time, degree-holding employees. The sample included 1,736 schools for people with only a bachelor's degree.

The Georgetown analysis (2019 and 2022) uses data on the average net price and salary/earnings from the U.S. Department of Education's College Scorecard.

Although the Georgetown analysis focuses on value over the course of a student's full career (40 years), the researchers acknowledge that "some might have different goals that make short-term returns more ideal" and so attribute to colleges and universities "a net present value metric at various time horizons," such as 10, 15, 20 and 30 years post-graduation.