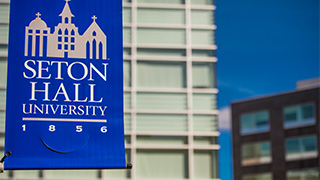 Prior to this designation as R2, Seton Hall was classified as a "Moderate Research Activity" or "R3" university, placing it among the Top Ten percent of all universities classified, but in the third tier.

Developed by the Carnegie Commission on Higher Education in 1973, the Carnegie Classifications have been used throughout higher education for nearly 50 years as the common descriptor for different types of public and private institutions. It is the leading framework for recognizing and describing institutional strengths.

"This is just one more example that Seton Hall's reputation is rising nationally," said Interim President Mary J. Meehan, Ph.D. "At Seton Hall there is a primary focus on the foundational and critically important liberal arts emphasis that is necessary to be a dynamic Catholic university and based on empirical data, the University again has been recognized for the world-class quality and quantity of its scholarship and research as well as its expanding doctoral programs. From the liberal arts and education to health sciences, law and theology, each of Seton Hall's schools and colleges have contributed to this success. This new classification reflects what great minds can do when we strive for academic excellence."

Within these categories Carnegie classifies 4,424 higher education institutions in the United States that grant degrees.

U.S. News & World Report Rankings
Representing less than 10% of all colleges and universities, the "National Universities" category used in the U.S. News and World Report rankings is derived from the list of Carnegie Classification Doctoral or Research Universities and has been so since the inception of the U.S. News rankings in 1983. Since 2010, Seton Hall has moved up 17 places among this top tier of national research universities to 119 in the country.

Moving Up
In Carnegie's Doctoral or Research universities category," there are three hierarchical designations:

Less than six percent of all colleges and universities in the nation are designated R1 or R2.

The criteria for the R2 and R1 groups are based on factors such as the number of research/scholarship doctorates awarded annually and a threshold of $5 million in research expenditures. Further criteria utilized in categorization, according to Carnegie, includes

"This R2 designation by Carnegie is a step in the right direction. Seton Hall has become a hub for ground-breaking research and scholarship and is firmly placed among the best Catholic universities in America," said Nicholas H. Snow, Founding Endowed Professor of Chemistry and Biochemistry and Director of Research at Seton Hall University. "Everywhere you look on our campuses, you can see students working alongside professors on cutting-edge research and scholarship. It is a new era at Seton Hall."

Peter Shoemaker, Dean of the College of Arts and Sciences, agreed, "Seton Hall strives to be a leader among Catholic universities and is committed to supporting strong programs in liberal arts disciplines such as Theology, Philosophy, History, Psychology and Political Science as well as the Fine Arts. Research by faculty in these disciplines complements inquiry in the sciences and professional fields by deepening and expanding our understanding of human experience and informing public debate."