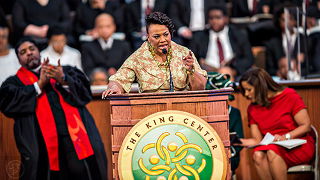 Seton Hall University will commemorate and celebrate Martin Luther King Jr.'s life with several events from April 3 to April 13 as the 50th anniversary of his assassination approaches.

"Dr. King gave us many gifts, but perhaps the greatest was his vision of a nation in which all people are free and at peace," said Interim President Mary Meehan. "That dream is still our dream today. It remains a rallying point in the fight against evils — both old and new. Even 50 years after he was taken from us, Dr. King's light is just as bright — and just as necessary — as it ever was."

Martin Luther King, Jr. Day, observed on the third Monday of January each year, is a national holiday dedicated to remembering King's life and his legacy of service. Seton Hall honored King on January 15, 2018 through a day of service coordinated by the Martin Luther King Jr. Leadership Program. The upcoming events in April are equally significant as they surround the 50th anniversary of his death on April 4, 1968 and provide a memorial to focus on his impact as a civil rights leader.

"The commemoration at Seton Hall serves to strengthen that light and reinforce the truth that all people are equally valuable in the eyes of their Creator," Meehan explained. "The love of Christ for all people is the foundation of our Church and our University. It underpins the ethos of servant leadership we strive to instill into our students."

The Martin Luther King Jr. Leadership Program was established in 1970. It is directed by Reverend Forrest M. Pritchett and remains the oldest and most prestigious servant leadership program at Seton Hall. It is one of the earliest programs of its kind in the United States. It provides partial tuition scholarships and leadership and management skills to participants, as well as opportunities for community service and research involving values and social justice.

"When we come together as an MLK community to discuss politics and social issues, to host informational or commemorative events, or to participate in various volunteer activities, we're carrying the mantle of generations before us who refused to use complacency as an excuse for inaction," Johnson continued. "We educate ourselves and our community so that when we see injustice or oppression we can take appropriate action."

Scheduled programs include a talk by bestselling author Chris Lowney on Wednesday, April 4 at 4 p.m. in the Chancellor's Suite as a part of the seventh annual Servant Leadership Day. Lowney has previously served as the Managing Director of JP Morgan & Co. in Singapore, Tokyo, London and New York and is the current chair of the board of Catholic Health Initiatives. Lowney will incorporate his international perspective in his presentation, "21st Century Servant Leaders: How They Think and What They Do." Among others, Lowney will tackle the seldom-broached topic of leadership and suffering.

The Community Dialogue program on Sunday, April 8 at 4 p.m. in the Jubilee Atrium will feature well-known alumnus and former MLK Scholar Matthew W. Wright '89, founder and president of Disciplina Group LLC. Prior to founding Disciplina Group, Wright served as vice chancellor for investments and chief investment officer of Vanderbilt University, the first African American to hold this title at a university with more than a billion-dollar endowment. Wright received a Bachelor of Science in Business with a major in finance from Seton Hall and a Master of Business Administration from the University of Rochester. He delivered the baccalaureate commencement address in 2017.

University Archive and University Library will sponsor an exhibit/presentation on archival material on the impact at Seton Hall and reference books on the assassination.

Program: The King Center: Martin Luther King, Jr. Peace Prize Award Ceremony–The Martin Luther King, Jr. Nonviolent Peace Prize is The King Center’s highest award presented for commitment to nonviolence as a way of life through which social justice, human rights and civil liberties are attained for all. The prize also recognizes achievements in the eradication of poverty and racism, and the successful quest for alternatives to war.
Time: 10:30 a.m.- 1 p.m.

Program: Global Bell Ringing and Musical Tribute – Starting at the National Civil Rights Museum in Memphis, TN and The King Center in Atlanta, GA. Seton Hall University bells will take part in the musical tribute and will include Dr. King’s favorite hymn, Precious Lord. 7:01 (6:01 CST) is the exact moment of the assassination. on the balcony of the Loraine Motel in Memphis, Tennessee. He was there in support of striking African American city sanitation workers. The workers had staged a walkout on February 11, 1968, to protest unequal wages and working conditions imposed by then-mayor Henry Loeb. At the time, Memphis paid black workers significantly lower wages than whites. Several sanitation workers had been killed on the job due to unsafe working conditions. In addition, unlike white workers, black workers received no pay if they stayed home during bad weather; consequently, most blacks were compelled to work even in driving rain and snowstorms.
Time: 7:01 p.m. (exact time of the assassination)
Location: University Green

Program: MLK Memorial: Faculty Dialogues – On Tuesday, April 10 we will do short presentations, to faculty, staff and students, on "MLK's Human Relations Legacy: What Needs to be Done?" The Tuesday offerings will be coordinated with Dr. Balkun and the Center for Faculty Development as seen below.
Time: 3:30 p.m.
Location: University Center, Faculty Lounge
Sponsors: Center for Faculty Development, MLK Program, Freshman Studies

MLK Alumni Weekend– Alumni from 1970's through the present will convene to appraise Dr. King's legacy.

Additional Information:
Mountaintop Moment– Around the world, people will reflect on their own Mountaintop Moment - like Dr. King, and depict the future as they see it from their mountaintops. These "inspiramercials" (inspiring commercials) will be depicted through visual art, song, digital media, spoken word and more. Join the conversation by using the hashtag #MLK50Forward and #MountaintopMoments, or you can follow the link (below) and enter your mountain top moment.

The official page for the commemoration of 50th Anniversary of Dr. Martin Luther King, Jr.'s assassination.

All King Center 50th Anniversary events are available through this link.