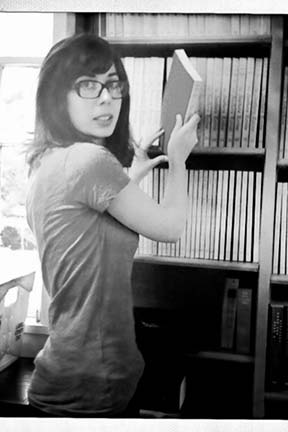 Professor Cara Blue Adams, an award-winning writer of fiction and editor who joined the Creative Writing faculty here at Seton Hall in the fall, was featured in Poets & Writers magazine for her work at the Bread Loaf Writers’ Conference.
At Bread Loaf, described by The New Yorker as "the oldest and most prestigious writers' conference in the country,” Adams is a member of the Admissions Board.

The article, “The Aha! Moment: Cara Blue Adams of the Bread Loaf Writers’ Conference,” details Professor Adams’ critique and response to a piece of fiction submitted by an emerging writer for consideration for the Conference’s coveted “waitership” award, a program in which select writers are given the opportunity to attend Bread Loaf for little or no cost “in exchange for waiting tables in the communal dining hall for the roughly two hundred and fifty writers, agents, editors, and publishers attending the annual ten-day event in Ripton, Vermont.” The “waitership” awards are highly competitive and feature generations of critically acclaimed writers as alumni; Adams is a former Bread Loaf “head waiter.”

Known for her ability to write, edit and recognize literary talent, prior to coming to Seton Hall Professor Adams taught at Coastal Carolina University and spent five years on the editorial staff of The Southern Review, ultimately rising to co-editor of this quarterly that TIME magazine acclaimed as “superior to any other journal in the English language” and The New York Times (in characteristically more measured terms) described as “a leading literary quarterly.”

Work Adams edited has been reprinted in or recognized as notable by The Best American Short Stories, The Best American Essays, The O. Henry Prize Stories, and The Pushcart Prize Anthology. Her short stories appear in The Missouri Review, The Sun, The Mississippi Review, The Kenyon Review, EPOCH, and Narrative, which named her one of their “15 Below 30.” She is the recipient of the Missouri Review William Peden Prize and the Kenyon Review Short Fiction Prize, along with scholarships and fellowships to the Bread Loaf Writers’ Conference, the Sewanee Writers’ Conference, and the Virginia Center for the Creative Arts (VCCA).

You can read the Poets & Writers article, “The Aha! Moment: Cara Blue Adams of the Bread Loaf Writers’ Conference,” here»