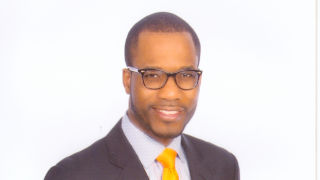 The Rev. Joseph V. Thelusca has been appointed to the newly created position of Special Advisor to the Provost. His primary duties will include working with the Career Center to assist undergraduates — including international students — in building their professional networks.

A native of Haiti, Rev. Thelusca immigrated to the United States when he was 13 years old. He comes to Seton Hall with a strong background in government and international relations and youth leadership development. He was appointed as a minister in the Allegheny East Conference of the Seventh-day Adventist Church in 2010. From 2010 to 2014, he served as associate pastor at Church of the Oranges in Orange, N.J. Since 2014 he has served as senior pastor at Mount Olivet Church in Neptune, N.J. He also serves as chaplain of the East Orange Police Department.

"I'm thrilled to have been given the opportunity to join the amazing Seton Hall family. I'll be assisting in areas relating to mentorship and coaching, community engagement and public policy. I look forward to building on the tremendous works, which have been taking place at this great academic center," said Rev. Thelusca, Special Advisor to the Provost.

In addition to his pastoral responsibilities, Rev. Thelusca has held several roles in state and local government. He was appointed by Governor Chris Christie in 2014 to the State Commission on National and Community Service, and was reappointed for another three-year term in 2017. Most recently, Governor-elect Phil Murphy asked him to join his transition team.

Rev. Thelusca also worked as Chief of Staff for former New Jersey Assemblyman Craig A. Stanley. He was appointed by then Governor Christine Todd Whitman to serve as a Parole Specialist on the New Jersey State Parole Board from 1999 to 2002. He also has experience as Ombudsman and Inmate Advocate at the Essex County Jail.

His national and international experience includes positions as Senior Consultant for Government Relations Worldwide at BKSK Associates in Washington, D.C., White House Liaison for Caribbean Affairs from 2003 – 2006, and an advisor to the USAID Assistant Administrator for Latin America. In 2017, he was a White House finalist for the position of Ambassador to Haiti.

He received a B.S. in health and nutrition from Montclair State University and a M.A. of divinity degree from Andrews University Theological Seminary in Berrien Springs, Michigan. He also earned a M.A. in Counseling from Seton Hall.

"Given the wide range of his experiences, we know that Rev. Thelusca will bring his wisdom to the already great team at the Career Center at Seton Hall," notes Karen Boroff, Interim Provost. "Our students, at every turn, seek assistance as they discern their career paths. We are fortunate to have Rev. Thelusca work with our students."