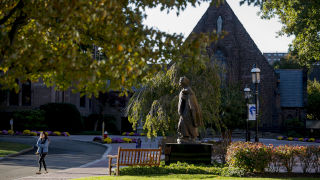 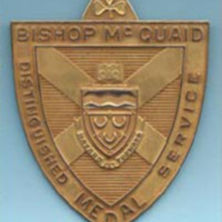 The medal is in the shape of a shield, forged in bronze with a gold finish. The recipient's name, along with the date of award and the name of the school or office they serve, are inscribed in cursive script on the reverse side. The front features a shamrock, which signifies Bishop McQuaid's Irish ancestry and the Holy Trinity of the Father, Son, and Holy Spirit on the triangular tip connecting the medal to the ribbon. The legend "Bishop McQuaid Distinguished Service Medal" adorns the outside border of the medal.

The inside features the Cross of Saint Andrew, Patron Saint of Scotland and the Diocese of Rochester in Great Britain, which Bishop McQuaid adopted as part of on his own coat of arms when he became leader of the Diocese of Rochester, New York from 1868 to 1909. Within the center is the Seton Hall University crest, featuring the school motto Hazard Zet Forward, that translates "In Spite of the Hazards, Go Forward," in Old English. James Roosevelt Bayley, the first Bishop of Newark who named Seton Hall after his aunt, Elizabeth Ann Seton, the first American-born saint, adopted the motto.

Father Holmes was invited to be the first Carl J. Peter Chair of Preaching at the North American College in Rome (1999–2000). Returning to Seton Hall, he was named Associate Provost for Academic Administration, continuing to teach courses in moral and sacramental theology. As the University's first Vice President for Mission and Ministry, he led the efforts to obtain a $2 million award from Lilly Endowment, establishing the Center for Vocation and Servant Leadership. He then served as Vice President and Interim Dean of Seton Hall's School of Diplomacy and International Relations and, later, as the University's Executive Vice President.

Teaching in the Department of Religion, Father Holmes has published articles in numerous journals and was invited to create This Sunday's Scripture, the first homily service of Twenty–Third Publications. He has also offered a number of "authentic preaching" practicums to priests, deacons and seminarians from around the English–speaking world. In collaboration with the National Leadership Roundtable, he developed the Toolbox for Pastoral Management, teaching pastors the administrative skills needed to lead a vibrant Catholic parish in the 21st century. He also edited the award–winning two–volume A Pastor's Toolbox: Management Skills for Parish Leadership (2014 and 2017) from Liturgical Press. 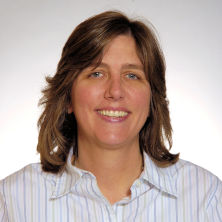 A 1987 Seton Hall graduate with a B.S. in Finance, Matta was a three-year member of the Pirates fencing team. In 1989, she completed her Master of Public Administration at Seton Hall. Matta has two daughters, Shea and Madeline (currently a Seton Hall sophomore).