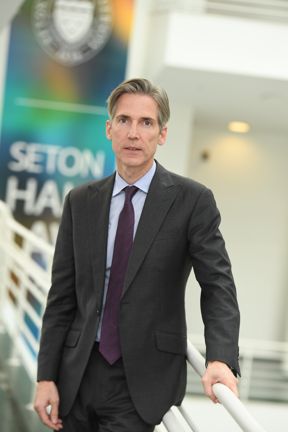 To much acclaim, Law Professor Thomas Healy has released his latest book, Soul City: Race, Equality, and the Lost Dream of an American Utopia. Featured by NPR and KIRKUS, it was named an Editor's Choice by The New York Times Book Review and a "must read" by the Chicago Review of Books. In addition, it was featured and highly praised in The New Yorker magazine, the New York Journal of Books, and by BookPage as one of six books that "reveal the dreams of America's Black forefathers and foremothers." In a feature in The Atlantic, Healy himself discusses "What the demise of an experimental Black town reveals about the struggle for racial equality today."

In support of this project, Professor Healy was awarded a Guggenheim Fellowship and received a Public Scholar Grant from the National Endowment for the Humanities. The Public Scholar Grant supports the creation of well-researched nonfiction books in the humanities written for the broad public.

The book, published by Metropolitan Books/Henry Holt and Co., explores the rise and fall of Soul City, a concept developed and nurtured in the 1970s by civil rights leader Floyd McKissick. It was designed as a model of black economic empowerment and to help relieve northern urban decay. The planned city was to be built on an abandoned slave plantation in rural North Carolina and was to reflect the latest thinking in social policy and urban planning. Despite support from the Nixon administration and various private organizations, the plan ran into stiff resistance from conservatives, including Senator Jesse Helms, and was abandoned after 10 years.

Professor Healy is the Gerard Carey Research Fellow at Seton Hall Law, where his teaching and scholarship focus on issues related to Constitutional Law and, specifically, the First Amendment. His acclaimed first work, The Great Dissent: How Oliver Wendell Holmes Changed His Mind – and Changed the History of Free Speech in America (Metropolitan Books/Henry Holt, 2013), won the Robert F. Kennedy Book Award, the Hugh M. Hefner First Amendment Award, and the New Jersey Council for the Humanities Book Award. Professor Healy is a native of North Carolina and a former reporter for the Raleigh News & Observer, which played a central role in Soul City's demise.

An Excerpt from the Book Soul City: Race, Equality, and the Lost Dream of an American Utopia

"Black Boy in a White Land"

Where do we go from here?

That was the question on everyone's mind, and Floyd McKissick was certain he knew the answer.

It was May 1968, one month after the assassination of Martin Luther King Jr. For thirteen years, ever since the Montgomery bus boycott, King had been the moral conscience and public face of the civil rights movement. He had taken on Bull Connor and his dogs in the Birmingham campaign, inspired the nation with his soaring rhetoric in front of the Lincoln Memorial, and led the historic march for voting rights from Selma to Montgomery. His demand for freedom and integration had given the movement its sense of purpose, while his gospel of love and nonviolence had provided its strategic framework. The recipient of the 1964 Nobel Peace Prize, King had been the most influential Black man in America—perhaps the world. And although that influence had waned in recent years as a younger generation of activists embraced more militant and separatist agendas, King was still the closest thing to a unifying Black leader.

Now he was gone, gunned down on the balcony of a Memphis motel, and the civil rights movement confronted an existential question: What next? The immediate response to King's death had been grief and violence, with protests and riots breaking out in cities across the country. Already there had been nearly as many riots in 1968 as in any other year of the decade, itself the most tumultuous of the century. But the unrest was largely destructive, a way to release anger and frustration, not to chart a course forward. And as the fires burned out and the dust settled, the major civil rights organizations were debating which road to take and vying to show the way. Ralph Abernathy, who had assumed the reins of King's Southern Christian Leadership Conference, pledged to continue the Poor People's Campaign begun earlier that year. Leading a group of three thousand demonstrators, he set up a tent city on the National Mall and demanded $30 billion in poverty relief and an economic bill of rights that would give every American a guaranteed income. Whitney M. Young Jr., executive director of the National Urban League, called for a "White People's March" on the capital as a sign of interracial solidarity, while Roy Wilkins, head of the National Association for the Advancement of Colored People (NAACP), pushed for new jobs legislation and an "Adopt a Cop" program to improve relations between Black people and the police. The Student Nonviolent Coordinating Committee, more radical than its counterparts, deleted the word "nonviolent" from its name, urged Blacks to take up arms in self-defense, and contemplated a merger with the revolutionary Black Panthers.

The Congress of Racial Equality (CORE) rounded out the "Big Five" civil rights groups, and it, too, was trying to determine the next step in the struggle for Black freedom. For McKissick, who had been elected national director two years earlier, the answer was clear, and in the second week of May he called a meeting of CORE's National Action Council to share his vision.

They gathered in east Baltimore, which just weeks earlier had witnessed one of the worst riots in the country. For eight days, the city's Black neighborhoods had resembled a war zone, with residents smashing windows, looting stores, burning buildings, and throwing rocks and bottles at police and firemen. Cops in riot gear had marched through the streets, firing tear gas, exchanging shots with snipers, and rounding up lawbreakers and onlookers by the hundreds. When local officers proved unable to quell the violence, Governor Spiro Agnew declared a state of emergency and called up five thousand National Guardsmen, and when they, too, proved inadequate, President Lyndon Johnson dispatched five thousand soldiers to the area. It took more than a week and the arrest of six thousand people to restore order, and the final toll was devastating: six people dead, seven hundred wounded, and $12 million in property damage. Even now, as council members filed into the meeting, evidence of the riots was all around them: in boarded-up windows, burned-out storefronts, and the suspicious stares of newly armed shopkeepers.

Inside, McKissick quickly got down to business. He began with a report he had drafted with the help of his assistant director, Roy Innis. Titled "A Nation Within a Nation," the report argued that America was divided into two societies, one prosperous and white, the other impoverished and Black. A dam separated these two societies, and like all dams it held energy that could either create or destroy. The challenge was to channel that energy into a constructive program for the liberation of Black society. The prevailing approach had been to rely on government welfare, the report declared. But "handouts" were not the answer. Taxpayers disliked them because the recipients seemed ungrateful, while the recipients resented them because they offered no hope of permanent escape. Instead, the poor had to be given the same things everyone else wanted: jobs, opportunity, and control over their own destiny.

To achieve these goals, McKissick called for a sweeping program of economic development and urban reconstruction. At its heart would be a network of community corporations—nonprofit entities owned and managed by local residents. Funded by government-backed loans, these corporations would finance the creation of local businesses and provide job training for the unemployed. They would also use tax incentives to entice white companies to build plants in minority neighborhoods, train residents to operate the plants, and then sell them to the community after recovering their costs. The community corporations would use the revenue generated by the plants to invest in local businesses and pay for social services, thus creating a self-sustaining economic model. It was an ambitious and innovative plan that combined elements of free enterprise and socialism. And with an estimated price tag of $1 billion, it was far more politically palatable than the $30 billion sought as part of the Poor People's Campaign.

Media Reviews and Feature Highlights
NPR, "In Soul City, One Man Envisions A Place Where Black People Have Power, Opportunity": "Healy's fascinating book explores how McKissick went about building a city from scratch, only to have his dreams dashed by a combination of prejudice and bureaucracy. It's an excellent chronicle not just of McKissick's project, but of an America in the 1970s still influenced by anti-Black racism."

The New York Times Book Review, Editors's Choice, "The Black American City that Almost Came to Be": "One of the greatest least-told stories in American history... Healy does an excellent job recounting the details."
The New Yorker: "The Plan to Build a Capital for Black Capitalism"

The Atlantic, Professor Healy discusses "The 1970s Black Utopian City That Became a Modern Ghost Town" and "What the demise of an experimental Black town reveals about the struggle for racial equality today."

KIRKUS, "An engrossing and often heartbreaking look at a singular attempt to achieve some measure of racial equality in the U.S.": "Healy ably delineates the complex process of creating a city from scratch, which involved promotion, fundraising, grueling bureaucracy and political attacks, and attempting to convincing people and businesses to relocate to the proposed city—not to mention the devastating series of articles in the Raleigh News & Observer alleging fraud and corruption on the part of McKissick."

Chicago Review of Books, Soul City included on the "must-read" books for February.