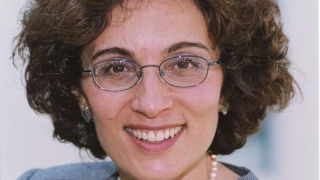 Karen Boroff, interim provost, received the 2018 Curtis E. Tate Jr. Award from the North American Case Research Association (NACRA) for "The Incident in Kabul" case, which she co-authored with Major Matthew Pratt of the U.S. Army.

The Curtis E. Tate Jr. Award is given out each year at the annual meeting of NACRA to the case that is deemed to be the best case published in the Case Research Journal in the preceding year. The editors of the Case Research Journal begin the award process by nominating up to eight cases for the award. A panel of the three most recent past presidents then select two to four cases as finalists. From that short-list of cases, one is selected.

"The Incident in Kabul" takes place in Afghanistan and features a U.S. Army captain facing a crisis situation when fuel supply is cut off to local Afghan allies in an effort to encourage increased efficiency within the Afghan police logistics system. Reviewers of the case noted that it was a groundbreaking area in a setting never before published in the Case Research Journal.

The case was originally presented by Boroff and Pratt at the 2016 annual meeting of NACRA. It won the Gold Medal for the best case presented that year. With feedback, Boroff and Pratt revised the case and submitted it for publication. It was published in Volume 37, Issue 4 of the Case Research Journal in 2017.

"I am so appreciative that Seton Hall University afforded me the opportunity to have a sabbatical and that I was able to serve as a visiting professor at the United States Military Academy, where I met Major Pratt," said Boroff. "Our collaboration was intellectually stimulating, helped each of us professionally, and expanded the vistas of our disciplines for the betterment of students everywhere - civilian and cadet students alike."

Reviewers also noted that, among other themes, the humanity of one to another in a time of crisis was put forth. The value of bringing a case such as "The Incident in Kabul" into a classroom setting of civilians can help bridge the gap between civilian and military, especially as more veterans attend universities.

"I'm honored to have had the opportunity to work with Dr. Boroff on this case," said Major Matthew Pratt. "Seton Hall's gracious lending of Dr. Boroff's time to West Point for that semester afforded us the opportunity to collaborate and help further learning in the classroom through the use of this case. My sincerest thanks to both Seton Hall and West Point for allowing Dr. Boroff and me to work on this project."

Another one of Boroff's case studies, "Maria Gonzalez," was a 2015 Curtis E. Tate Jr. Award finalist. Additionally, this case was one of 15 best-selling Case Research Journal cases in 2017. "Starbright Jewelers," which Boroff co-wrote with Samantha Lordi, a Stillman School of Business graduate student, was also a best-selling case in 2016.