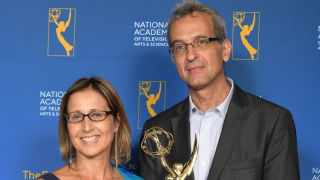 The Office of the Provost at Seton Hall University invites you to a special in-person gathering for our speaker series Impact Talks, featuring a screening of the Emmy Award-winning documentary It Will be Chaos, followed by a panel discussing including film directors Filippo Piscopo and Lorena Luciano, and Associate Dean and Professor Jeff Togman, College of Arts and Sciences. Refreshments will be served. This event is Co-sponsored by the Office of the Provost and The Alberto Italian Studies Institute and will take place on December 2, 2021 in the Nursing Amphitheater, Schwartz Hall, Room 113 at 6 p.m. Click here to register.

Lorena Luciano
A national Emmy® winner with a Law degree, Lorena tells urgent stories from a ground-level angle, directing films that speak to starkly different audiences. Her films, recipient of international Best Documentary and Best Directing Awards, have screened at the Venice Film Festival, the National Gallery, the EU Parliament, a cultural makeshift in war-torn Yemen, the World Bank, and universities throughout the world.

With prestigious film grants from the Sundance Institute, the MacArthur Foundation, NYSCA, and Chicken & Egg Pictures, among others, Lorena's work focuses on Social Justice, Human Rights, the Environment, and the Arts. She lives in NYC with her two children and her husband/film partner Filippo Piscopo.

Inspired by content resonating with diverse audiences, Filippo has crafted engaging stories supported, among other entities, by the Sundance Institute and featured at film venues such as the Venice Film Festival, IDFA's Central Pitch, and the IFP's Spotlight on Documentaries.

Granted the Social Justice Award by Amy Goodman, Filippo's documentary work, often in collaboration with his wife and film partner Lorena Luciano, has opened to good reviews by mainstream media such as Variety and the New York Times and has been distributed globally.

Jeffrey M. Togman
Jeffrey M. Togman is Professor of Political Science and Film at Seton Hall University. His film Mayor Mohamed just won a special jury award at the 2021 Montclair Film Festival, after having its world premiere at the Brooklyn Film Festival and its international premiere at the Arabisches Filmfestival in Tubingen, Germany. His film Home won a special jury award at AFI Docs and was broadcast on the Sundance Channel, and his film We're Not Blood won "Best Dramatic Documentary Feature" at the Atlanta International Documentary Festival after having its world premiere at the San Francisco Documentary Festival. Professor Togman's book The Ramparts of Nations explores French and American immigration policies over the last half of the 20th century, and he will be teaching his course "US Politics Through Documentary Film" next semester at SHU.