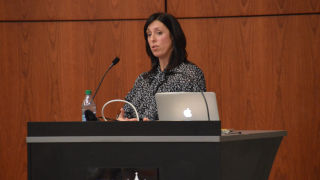 Historian and bestselling author Danielle McGuire spoke at the Conference on Women and Gender at Seton Hall University.

In addition to receiving a number of literary and historical awards, McGuire's work was recently cited by Oprah Winfrey at the Golden Globe Awards.

Now in its seventh year, the Conference on Women and Gender seeks to provide an interface between the academic and the experiential in order to enrich lived life. The sessions cover a range of subjects from the humanities to the natural sciences. The conference also engages with topics outside the academic tradition, including the recent session in collaboration with the Alice Austen House on one of the earliest female photographers.

This year, more than 300 people registered for the conference.

"This conference is a significant academic event and achievement for the university. It breaks down the wall between the ivory tower and the general public at a time when skepticism about higher education is on the rise," said English Professor and conference co-chair Karen Gevirtz. "It offers anyone, from the Seton Hall community and beyond, the opportunity to see the tremendous range of conversations about women and about gender, the diversity of viewpoints, and not only the versatility but also the very real-life applications of this academic discipline’s methods and principles."

History Professor and conference co-chair Vanessa May agreed, noting when she introduced McGuire that she often assigns her book, At the Dark End of the Street: Black Women, Rape, and Resistance--A New History of the Civil Rights Movement from Rosa Parks to the Rise of Black Power, to her students.

McGuire's presentation, "The Radical Roots of #MeToo: Race, Sexual Violence and the Meaning of Freedom," looked at the Civil Rights Movement through the lens of gender and sexual violence. She demonstrated how ignored and silenced women were often "disappeared from the narrative" but worked to combat sexual domination.

McGuire argued that the #MeToo movement is an extension of a women's movement that arose in the 1830's. She presented African American women as the first to speak about sexual violence and rape as a systemic form of oppression. These female activists notably rejected a culture that made assaults on black women permissible.

"I was really impressed with the student body and their incredible questions at the end," said McGuire. "This conference is at the forefront of thinking about women and gender across disciplines."

In her final comments, McGuire reminded the audience that speaking our truths can be one of the most powerful tools we possess: "We are not trained to change the system. Unless we look for it, the narrative will not change."

To read Danielle McGuire's recent book, see At the Dark End of the Street: Black Women, Rape, and Resistance--A New History of the Civil Rights Movement from Rosa Parks to the Rise of Black Power.