On Friday, July 17, 2020, two civil rights leaders went from their earthly work to their heavenly rest. One was known mostly by those who studied the period, C.T. Vivian, and the other was very well-known throughout the globe, John Lewis.

In 1947, Vivian participated in his first non-violent action to end segregation at lunch counters in Peoria, Illinois. But because of his strong religious upbringing and beliefs, he says he was called to a life in the ministry. However, he saw no separation between civil rights, faith and ministry because "racism is a moral issue." With the help of his church, he enrolled in American Baptist Theological Seminary in Nashville in 1955. Also, in 1955, he and other ministers founded the Nashville Christian Leadership Conference, an affiliate of the Southern Christian Leadership Conference (SCLC). The group organized and trained students to embark on a movement to end segregation in Nashville. The Nashville affiliate organized the city's first sit-ins in 1960 and led the first march of the Civil Rights Movement. In 1961, he joined Student Nonviolent Coordinating Committee (SNCC) members and other ministers to continue the Freedom Rides into Jackson, Miss. after a group from the Congress of Racial Equality disbanded. The SNCC group was arrested and Vivian was badly beaten at Parchman Prison. In 1963, Martin Luther King asked Vivian to work on the Executive Staff of the SCLC as the national director of affiliates. As an SCLC strategist, he worked to help get the Civil Rights Bill and Voting Rights Acts passed. In 1965, he infamously confronted Sheriff Jim Clark on the steps of Selma's courthouse while leading blacks to register to vote.

"Leadership is found in the action to defeat that which would defeat you. You are made by the struggles you choose." ― C.T. Vivian

"People do not choose rebellion; it is forced upon them. Revolution is always an act of self-defense." ― C.T. Vivian 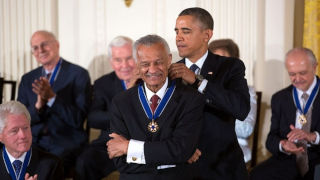 In 2013, President Barak Obama presented him with the Presidential Medal of Freedom. The citation read, "C. T. Vivian is a distinguished minister, author and organizer." A leader in the Civil Rights Movement and friend to Martin Luther King, Jr., he participated in Freedom Rides and sit-ins across our country. Vivian also helped found numerous civil rights organizations, including Vision, the National Anti-Klan Network and the Center for Democratic Renewal. In 2012, he returned to serve as interim President of the Southern Christian Leadership Conference.

Rev. Pritchett also observes that the leader's journey of transformation began with the following reflection from Lewis: "One day I heard of Rosa Parks, heard the words of Martin Luther King Jr. on the radio." The words of Dr. King and the actions of Rosa Parks inspired me to get in trouble. And I've been getting in trouble ever since." 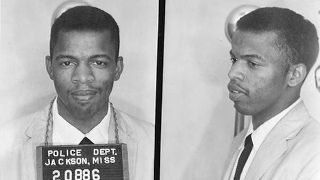 John Lewis was fifteen years old in 1955 when the Montgomery bus boycott began. Born to sharecropper parents in Troy, Ala., Dr. King jokingly referred to him initially as "the boy from Troy" when they meet in Montgomery, Ala. Later, John entered American Baptist Theological Seminary in Nashville, Tenn. There he and others received training and mentoring from the Rev. James Lawson in the non-violent confrontational approach to solving moral and ethical transgressions such as segregation, discrimination in public accommodations and the physical violence of racism. In the summer of 1960, approximately one hundred students from Historically Black Colleges and Universities (HBCU) and southern communities were invited to convene at Shaw University in Raleigh, N.C. to form a student branch of Dr. King's Southern Christian Leadership Conference (SCLC). The planning coordinator for the logistics of that Easter weekend event was Ella Baker, executive director of SCLC at the time. After much discussion about the role of youth in the national civil rights arena and the emerging critique of traditional civil rights organizations approaches, a new organization was born, the Student Non-Violent Coordinating Committee. The first elected president was John Lewis. Ella Baker resigned from SCLC in August to acknowledge a calling to mentor this next generation of civil rights leadership from college students. Rev. Lawson and Baker were seminal figures in the development of a cadre of student leaders such as Diane Nash, Marion Barry, James Bevel, Julian Bond, Bernard Lafayette and John Lewis.

In 1961, SNCC would reinvigorate through John's involvement the Freedom Riders bus initiatives that were abandoned by the civil rights organization, Congress of Racial Equality (CORE). Previous CORE sponsored trips met horrific violence from the Ku Klux Klan (KKK) with lead pipes and bombs. When SNCC coordinated the trips, everyone wrote their last will and testaments including John Lewis.

"By the force of our demands, our determination and our numbers, we shall splinter the segregated South into a thousand pieces and put them back together in the image of God and democracy." ― John Lewis, author of March: Book Two

He is perhaps one of the few public figures for whom every American can witness, through available media, the brutality of a racist system inflicting violence on a citizen exercising his rights. In 2016, he inspired and lead a sit-in on the floor of Congress after the Orlando, Fla. night club shooting to compel his congressional colleagues to vote on anti-gun legislation.

"You are a light. You are the light. Never let anyone—any person or any force—dampen, dim or diminish your light. Study the path of others to make your way easier and more abundant. Lean toward the whispers of your own heart, discover the universal truth and follow its dictates. […] Release the need to hate, to harbor division and the enticement of revenge. Release all bitterness. Hold only love, only peace in your heart, knowing that the battle of good to overcome evil is already won. Choose confrontation wisely, but when it is your time don't be afraid to stand up, speak up and speak out against injustice. And if you follow your truth down the road to peace and the affirmation of love, if you shine like a beacon for all to see, then the poetry of all the great dreamers and philosophers is yours to manifest in a nation, a world community and a Beloved Community that is finally at peace with itself."

― John Lewis, author of Across That Bridge: A Vision for Change and the Future of America

John Lewis put his life on the line for the basic values inherent in the American process of democracy that are guaranteed to each citizen. Remembering his contributions is a call to action for all citizens to do the right thing, the Godly thing, as often as possible.

Larry Greene, professor in the Department of History at Seton Hall University, notes:

John Lewis is an American civil rights movement icon because his life was committed to a struggle against racism and injustice throughout his entire life. He was not only a sixties civil rights major figure, but a man whose relevance to the struggle for racial and social justice in America involved a commitment sustained over his entire life from his early teen years to his eightieth year. His commitment was built upon the liberation theology of African American Christianity derived from the slavery period and a commitment to the secular sacred documents of America's founding. His expansive vision of what Christianity and the American nation could become transcended the narrow vision of those religious and secular founders to include all beyond race, ethnicity, gender and religion. Along the way he was influenced by the religious and secular prophets of the civil rights movement from Reverends Martin Luther King, Ralph Abernathy, C.T. Vivian and the other heroes and heroines of the movement like Rosa Parks and James Baldwin. He entered the Congress in the 1980s to continue the struggle for he knew that victory had not been achieved and racism was deeply ingrained in American society despite those that had declared victory with the passage of the 1964 Civil Rights Act and the 1965 Voting Rights Act. John Lewis knew that the struggle continues and has a long way to go to achieve Martin Luther King's "Beloved Community." We, as he is laid to rest, must pick up the baton and continue forward. The struggle for a racism free and just America continues.

A lot has been said and written about the life of John Lewis. He had a remarkable life, highlighted by his role in the historic twentieth century civil rights movement. But it is not the remarkable nature of his life that we should emphasize. John Lewis was an everyman. He did not possess the spell-binding oratory of Dr. King, the magnetism of Malcolm X or the organizing brilliance of Ella Baker, A. Philip Randolph, Bayard Rustin or some of his cohort in the Student Non-Violent Coordinating Committee. What he did possess was an astounding ability to commit his life to service, even when it could lead to his demise.

The brilliance of John Lewis was that he used his God-given talent to bear witness against racism, discrimination and oppression. Too often we lament not having leaders of the magnitude of King or Malcolm, ignoring the talent in our midst. In fact, Dr. King urged us to accept our unique gifts and not try to measure ourselves against someone else. John Lewis is an example par excellence of someone who used his unique gifts to provide a consistent (and needed) voice for the marginalized and oppressed.

The life of John Lewis and his comrades in the civil rights movement are a reminder of why Africana Studies and African American history are so important. Lewis, along with Bob Moses, Fannie Lou Hamer, Courtland Cox, Stokely Carmichael, Connie Curry, James Zwerg and countless others who served as Freedom Riders, voting rights registrars and foot soldiers in numerous marches helped to eradicate Malthusian racist and prejudiced practices in the south. By no means did John Lewis and others ever see their work as being completed and neither should we. It is our responsibility to unpack that era and challenge our students to consider the different models of leaderships, the efficacy of organizing and how the country changed (or not) from that period. It is instructive that Lewis continued, even with stage four cancer, to march, protest and use his voice to challenge discriminatory practices that should have been abandoned centuries ago. When one takes an account of the civil rights and post-civil rights era, John Lewis, as an activist and congressman, becomes a central figure in grappling with the myth and meaning of both eras. 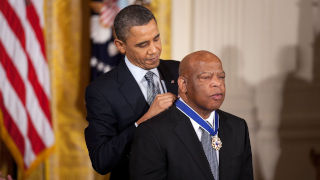 In 2011, President Barack Obama presented Lewis with the Presidential Medal of Freedom.

"Use the words of the movement to pace yourself. We used to say that ours is not the struggle of one day, one week or one year. Ours is not the struggle of one judicial appointment or presidential term. Ours is the struggle of a lifetime or maybe even many lifetimes and each one of us in every generation must do our part. And if we believe in the change we seek, then it is easy to commit to doing all we can, because the responsibility is ours alone to build a better society and a more peaceful world." ― John Lewis, author of Across That Bridge: A Vision for Change and the Future of America

"Nothing can stop the power of a committed and determined people to make a difference in our society. Why? Because human beings are the most dynamic link to the divine on this planet." ― John Lewis, author of Across That Bridge: A Vision for Change and the Future of America