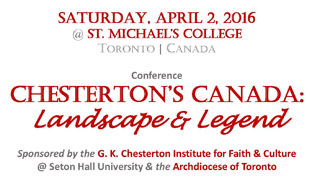 The G. K. Chesterton Institute for Faith & Culture at Seton Hall and the Office of the Cardinal of the Archdioceses of Toronto have the pleasure of inviting you to attend our upcoming Chesterton Conference to be held on Saturday, April 2, from 2 p.m. to 6 p.m. at the University of St. Michael’s College in Toronto, Canada. The theme of the conference, “Chesterton’s Canada: Landscape & Legend”, is derived from a talk Chesterton gave at St. Michael’s College during his visit to Canada in 1930. In this talk, he suggested that the Canadian legend originates in the battle on the plains of Abraham, the battle which led to the deaths of both the English General, James Wolfe whom Chesterton calls “that bourgeois boy of genius” and the French General Montcalm whom Chesterton describes simply as “that great French gentleman in arms." Because of his conviction that conflict is the best basis for friendship, Chesterton saw this battle as a promise of the eventual reconciliation between the French and the British traditions in Canada’s national life. The “landscape” in the title refers to Chesterton enthusiasm for the magnificence of the landscape as he entered Montreal by way of the St. Lawrence River.

Speakers:
Father Ian Boyd, a Canadian priest and an internationally recognized Chesterton scholar, is the author of The Novels of G.K. Chesterton. For many years he was Professor of English at St. Thomas More College, University of Saskatchewan. Currently he is a member of the Department of English at Seton Hall University in South Orange, New Jersey. Father Boyd lectures on the subject of "Sacramental Themes in Modern Literature." Among Christian authors whose work he discusses are T.S. Eliot, Graham Greene, C.S. Lewis, Flannery O'Connor, Piers Paul Read, Muriel Spark and Evelyn Waugh. In nineteenth-century literature, he is interested in the work of such authors as Charles Dickens, Anthony Trollope and Nathaniel Hawthorne. Father Boyd is the Founder and Editor of The Chesterton Review and the President of the G.K. Chesterton Institute for Faith & Culture based at Seton Hall University.