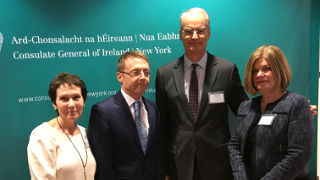 The achievements of four Seton Hall educational leaders were recognized with their induction into the "Irish Education 100" honor roll at a ceremony in New York City on December 13, hosted by the Irish Consul General to New York Ciaran Madden.

Honorees included Deirdre Donohue Yates, founding dean and professor of theatre in the College of Communication and the Arts; Phyllis Shanley Hansell, professor and former dean of the College of Nursing; and Hugh Dugan, director of United Nations engagement and adjunct professor of UN and global governance studies at the School of Diplomacy and International Relations. Also honored but not in attendance was Father Brian X. Needles, director of campus ministry and adjunct professor of moral theology at Immaculate Conception Seminary School of Theology.

This national list, compiled annually since 2009 and published by the Irish Voice, honors prominent leaders in American education, especially at the university level, who are of Irish descent.

"We are indeed proud that we have been able to identify and acknowledge so many Irish who have put such extraordinary effort into educating generations of Americans from coast to coast," the newspaper stated as it noted that the Irish were responsible for establishing the Catholic school system in America.

Dean Yates began her time at Seton Hall as a faculty member in 1992. She attained the rank of full professor and served as the first female chair of what was the Department of Communication and the Arts, before being named the founding dean of the recently formed College of Communication and the Arts. She is a recipient of the University's Humanitarian Award and 2014 Woman of the Year. A classically trained actor and director, she has received numerous awards, grants and distinction for her work in the arts, including two Inland Theatre League awards, a Gilbert V. Hartke award, and Lilly Grant funding to support the exploration of faith through the arts. She remains a prominent member of the arts community, most recently being honored with the Vanguard Theatre Company's Visionary Award for her dedication to diversity in the arts. Dean Yates has toured the country performing Shakespeare, directed productions in New York City as well as directed numerous local and regional productions, and has presented at several national conferences, primarily on the subject of women in the arts and academia. She is a member of the Equity company the Yates Musical Theatre for Children, and she serves on the Board of Governors for the South Orange Performing Arts Center and on the advisory board for the award-winning WSOU radio station. Married with two daughters, she traces her Irish ancestry to counties Caan and Kerry, three generations back.

Phyllis Shanley Hansell was first appointed to the College of Nursing faculty in 1975 and attained the rank of Associate Professor with tenure in 1979. Subsequently in 1984 during a leave from her tenured appointment at Seton Hall she served as the Director of Nursing for Research at Memorial Sloan Kettering returning to the University in 1986 and attained the rank of full professor in 1987. During her tenure at Seton Hall, she has served three terms as Chair of the Graduate Nursing Department where she has led in program development and the initial accreditation of the MSN in Nursing. As an active participant in university governance she served as President of the University’s Faculty Association in 1982-1983 when at the 1983 Commencement she was the citation presenter for Pearl Bailey who received an honorary degree from the University with President Ronald Reagan. Prior to her appointment as Dean of the College of Nursing, Professor Hansell served two terms as Chair of the University Faculty Senate. During her 15-year tenure as Dean of the College of Nursing, she led in the curriculum development, approval and implementation of the MSN/Clinical Nurse leader program, as well as the Ph.D. and DNP Programs. As a successful grant writer she has procured more than $8 million in external grant funding, which included a prestigious R01 grants from the National Institutes for Nursing Research and the National Cancer Institute both part of the National Institutes Health to support her research on families and children with cancer Hansell's research began when she was a doctoral student at Columbia University with a focus on children with cancer advancing to the inclusion of the families coping with the care of seriously ill children. She then transitioned to focusing on families' stress and coping with children with HIV. Her current focus is researching women infected with HIV and enabling their power through effective coping aimed to improve their holistic healthcare outcomes. During her tenure as Dean, Hansell was instrumental in the establishment of international partnerships with universities in Denmark, The Philippines, Ireland, South Africa, Macau, The Peoples Republic of China and Belgium. She has presented her research throughout the world on five continents. She has served as a Study Section Reviewer for the NIH, and as a peer reviewer on several leading nursing journals. Her publications are numerous and include both articles and chapters in nursing texts. She has been recognized for her achievements by the University as a recipient of the McQuaid Medal for Distinguished University Service in 2001 and a University Woman of the Year in 2012. She has also been recognized for her accomplishments by the Mount Sinai Medical Center in NY, Columbia University for her research and scholarship, and the N.J Governor’s Nursing Merit Award for Nursing Research. She was inducted into Sigma Theta Tau Alpha Zeta Chapter (Columbia University in 1976) the international nursing honor society and as an honorary member of Chi Eta Phi Sorority of nurses from diverse backgrounds in 2017. Additionally, she was inducted as a Fellow in the prestigious American Academy of Nursing in 2001 and a Distinguished Practitioner and Fellow of the National Academies of Practice in 2000. As an active member of her profession and the community, she serves as a trustee for the Partners in Health Foundation in Montclair and the NJ Institute for Nursing, as a Commissioner for the NJ Catastrophic Illness in Children Relief Fund Commission and as an Ambassador and Advocacy Committee Member for the Friend of the National Institute for Nursing Research, NIH. In her local community she is a member of the Junior League of Montclair Newark. Married with two sons, she traces her Irish heritage to paternal grandparents from counties Leitrim and Roscommon.

Professor Dugan came to the University in 2015 as the Thomas J. and Ruth Sharkey Visiting Scholar on UN Studies at Seton Hall, and his current position was created to take advantage of his UN expertise and commitment to the University. An international affairs scholar and career diplomat, he served the Department of State for 32 years. His expertise on U.S. participation in the United Nations is supported by his 26 years of experience working with the UN member states and Secretariat. An opinion leader with in the Olympic Movement, he is founder and president of the Truce Foundation of the United States, working to secure the adoption of the Olympic Truce by the UN General Assembly in the years of the Olympic Games. Married with two daughters, his paternal great- great-grandfather emigrated from County Cork in 1870. His mother's Curtis family immigrated in 1830. As a youth, Dugan built himself an Irish harp and taught himself how to play it, having been inspired by a local musician from Ireland. 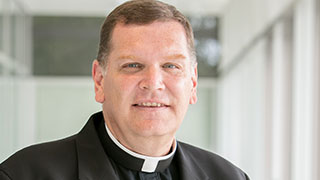 Father Needles was ordained a priest of the Archdiocese of Newark in 2006 and is currently the Director of Campus Ministry at Seton Hall University. He has served as parochial vicar at St. Joseph of the Palisades Parish in West New York (2006-07) and St. Philomena in Livingston (2007-2014) He is currently weekend assistant at Assumption Parish in Roselle Park. He served as the spiritual director of St. Andrew's College Seminary from 2013-14, receiving the St. Andrew's Achievement Award at its annual Notes of Distinction ceremony. He served as assistant director of vocations for the Archdiocese of Newark from 2013-14. In addition, he served as spiritual director of Couples for Christ, Foundation for Family Life from Northern New Jersey from 2010-14. He is also a spiritual director at the Immaculate Conception Seminary School of Theology. He traces his Irish ancestry three generations back to County Mayo. His relatives include the Murphys, O'Reillys and Munnellys. He has cousins who reside in Castelbar, County Mayo.

Categories: Arts and Culture , Faith and Service , Health and Medicine , Nation and World