Lunch and Learn: Character in Leadership 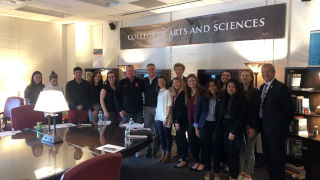 "Don't do anything in private that you would not want displayed on a billboard." Rutgers Athletic Director and Seton Hall Graduate Patrick Hobbs shared this tidbit of knowledge with the Arts and Sciences cohort during their lunch and learn two weeks ago. Hobbs, along with Mike O'Neill (also a Seton Hall Alumni) and Trish DiPaolo, visited Seton Hall to share their experiences with the relationship between character and leadership, as character is one of the seven foundational pillars of the Buccino Leadership Institute. Each offered incredible insights, and the students took much away from the afternoon.

A majority of the lunch was open for a Q&A from the students to Hobbs, O'Neill, and DiPaolo. This created a very open atmosphere for the Arts and Sciences Cohort to delve into the specifics about character and its importance. Patrick Hobbs, who has held prestigious positions such as the Dean of the Seton Hall Law School, Ombudsman to the Office of the Governor of New Jersey, and currently the Athletic Director at Rutgers University, explained that every position he has held has been offered to him without personally seeking them out. He emphasized that having good character is something that can get you extremely far in life, as he was offered all his jobs based on his great reputation and exceptional character throughout his personal and professional life. Someone is always watching, even if you do not think they are, so it is important to always put the best version of yourself forward.

Mike O'Niell, head coach of the Women's Soccer team at Rutgers University, and Trish DiPaolo, Volunteer Assistant Coach, shared their insights about character on and off the soccer field. They explained that during the recruitment process for future Rutgers Women's Soccer athletes, they look at a lot more than just the athletic skills. Mike and Trish watch how the possible future player interacts with their teammates on the bench, their coaches during huddles, and their parents before and after the games. They also mentioned that if they take the player and her family out to eat, they pay attention to how they treat the waiters and waitresses. Their character weighs more heavily than their actual athletic skills, as Mike and Trish will not offer them a position on the team if they do not have an upright personality. This was a very good lesson for the leadership students, as they learned that it is important for a leader to not only be skilled in the more professional aspects of leadership, but also to have integrity and a good reputation.

The Arts and Sciences Lunch and Learn get-togethers are chances for the students from the Cohort to learn more deeply about character's role in leadership. Sometimes the students and Dean Kaiser meet with no special guest to have casual discussions about personal experiences or stories they have acquired from others that express why character is such an important quality for a leader to possess. The Lunch and Learns also give them a chance to come together and bond as a cohort, further developing the meaningful family aspect of the Buccino Leadership Institute. These meetings are a great addition to the regular interdisciplinary family meetings that occur every Friday, and truly provide the students with a chance for a deeper understanding of leadership and the important qualities that come with it.