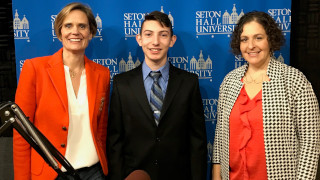 Amy is a ghostwriter for career, leadership, and executive coaches. She has written articles on topics such as salary negotiations, inter-generational workplace issues, and effective corporate leadership.

Leemor designs and facilitates workshops in academic, corporate, and non-profit settings that help individuals and teams incorporate change. Additionally, she owns her own consulting firm.

Both Amy and Leemor share expertise on imposter syndrome and how to overcome it. Imposter syndrome is experienced by people who reach their goal or their vision for themselves yet feel as though their success is a fluke. It can be felt by a range of individuals: from teens admitted into the college of their choice to adults who have successfully negotiated a significant raise. They feel as though they do not fit into their new role: a square peg in a round hole. At that point, the person who has earned their success feels like an "imposter." The belief that they do not fit in causes stagnation in their growth, with the thinking, "They will figure out that I do not belong here one day. Why should I get a better position when I don't belong in the one I am currently in?"

Leemor had explained that during her time at college, she suffered from imposter syndrome. Not confident in her grade point average, she took three non-matriculated classes for the master's program that she wanted. It was only after the 9 months of classes that she submitted her application and was accepted.

The freshman truly took this account to heart, gathering near the end of the presentation to share how much they had learned and how this presentation had empowered them to never feel as though they are undeserving of something they had earned. It ended in thunderous applause when one student stepped forward and firmly stated "I am a recovering imposter."

The students were forever changed, resolving to never again consider themselves imposters.