In a Sea of Students, Leadership Makes You a Catch 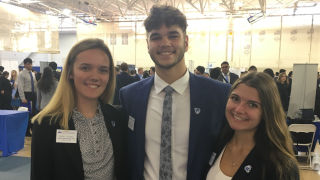 This past Wednesday, September 18, Seton Hall University hosted its annual Fall Career Fair. It was held in the field house of the Recreation Center, and was filled with tables from scores of companies ranging from military to sports, non-profits to financial advisories, and accounting firms to marketing companies. It has continued to be a fantastic opportunity for Seton Hall students to network with companies and recruiters, and for those companies in turn to look at and hire students for internships. Some students from the Buccino Leadership Institute's new class of 2023 were there, attending their first college career fair.

Freshmen, Andrew Youngberg, Nicole Caldera, Tilman Pitcher and Nicole Stangl walked around to many of the companies present. Going into the career fair, many of the freshmen worried that companies would be hesitant to talk to them and take their business cards and resumes due to their age, since many of the prospective employers seek interns in their third or fourth year. However, as their time at the career fair went on, they found that recruiters were happy to talk to them. Some recruiters were even disappointed and shocked to find out that the students they talked to were freshmen and not upperclassmen. The talent and confidence of the new leadership class impressed many recruiters. This professional attitude speaks to the bright future of the Buccino Leadership Institute.

When asked how they decided to present themselves to recruiters in order to make themselves more attractive prospects, Andrew said he tried to focus on a good firm handshake, eye contact, and being as attentive as possible. All four talked about how they tried to weave their personalities into the conversation to make themselves stand out among the hundreds of students who attended. They also made sure to mention the Buccino Leadership Institute when the opportunity arose. They relayed that employers were impressed with the program's syllabus and reacted positivity in the conversation that followed. At the end of the day all four freshmen, and likely every freshman leadership student who attended, thought that the career fair was a fantastic and insightful opportunity for learning about the working world. 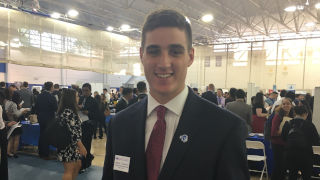 Andrew Youngberg, Nicole Caldera, Tilman Pitcher and Nicole Stangl, and all other leadership students who attended, effectively portrayed the Institute's pillars of magnificent character and courageous communication. Currently, both classes of the Buccino Leadership Institute are still underclassmen trying to market themselves to employers. However, the leadership students were up to the task. Dozens were able to exchange business cards, as well as give their resumes in the hopes of soon landing an internship. It speaks volumes to the character of the young students to be able to impress and catch the eye of these recruiters while in a sea of prospective employees.