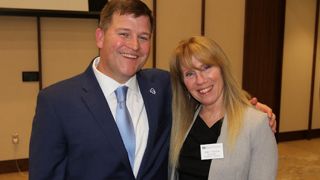 I came to Seton Hall to teach leadership, but instead became a student of it.

And Janet Fenton was my teacher. She didn't know it, but she taught a daily master class on servant leadership.

That's because Janet, the one and only staff member assigned to the Buccino Leadership Institute, is a true servant leader. Throughout her career at Seton Hall, she has put the needs of others and the needs of the university above her own.

Janet will be leaving the Buccino Leadership Institute on March 31st to be closer to her family, including her new grandchild, in Virginia.

In Need of Help, But Didn't Know it

When I arrived at Seton Hall in the summer of 2018, I was beyond excited. Just retired from the Army after 20 years, I was embarking on my "second career" as the executive director of the leadership program.

One of the people who was always there to help me was Janet Fenton. Even though she was not affiliated with the leadership program at the time (she was an administrative assistant for several departments in the Stillman School of Business), she was always willing to help.

Perhaps it was me going to the well one too many times. Or perhaps, being the mom of two active duty Navy SEALS, Janet knew that a retired Army officer likely needed LOTS of help. Regardless of her intent, Janet asked one day if I had anyone assigned to help me and the Buccino Leadership Institute with administrative duties. I didn't, and when it quickly became apparent to me that I needed serious help, I got approval for a job posting and Janet competed with other candidates to win the job.

And the rest, as they say, is history. 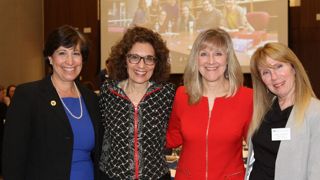 Behind the Scences MVP

Since then, Janet became much more than a staff member providing administrative support. Her official title was Coordinator for Academic Initiatives, but she played an absolutely critical role in helping me stand up the Institute.

Because of our small size, Janet had to be a guru in public relations, event planning, admissions, donor relations, budgeting, technology, registrar, catering, and more.

Her office was the one that students (and faculty) came to when they had a problem, or needed a shoulder to cry on.

Although she always got the Institute's mission accomplished, and I mean always, she never turned anyone away when they needed help. I would "catch" her doing favors for faculty members in departments and schools she didn't work for, yet she rarely asked anyone to do favors for her. For Janet, it was always about the mission.

For me, Janet was more than my administrative assistant. She was my counsel, my devil's advocate, my psychologist, my strategist, and my consigliere.

At times, Janet was like a mother figure and my biggest cheerleader. At other times, she would tell me when I was wrong about something. Janet always told me what I needed to hear, not what I wanted to hear. In doing so, she was willing to put the needs of the organization above her own, even if it meant risking our relationship. That is tough to do, but it's what leaders do, and Janet did it well.

So I started out with nobody, thinking I didn't need anyone, and in the end I got someone I couldn't have functioned without.

One Example of Her Servant Leadership

As it turns out, I'm not the only one at Seton Hall who felt this way about Janet Fenton.

Shortly after Janet started working with me at the Institute, I noticed that she often arrived and left with the same faculty member, and often on that faculty member's schedule. At first I thought it was coincidence, but then I realized that this faculty member couldn't drive due to a medical condition.

When I finally asked Janet about it, she told me she'd pick this person up in the morning and drop them off in the evening, sometimes even helping them grocery shop and perform other errands.

To do it, I later found out, Janet had to drive 25 minutes out of her way, each way. That's almost an extra hour on the road, and sometimes longer due to traffic, every day, for more than a year. She didn't tell people. She didn't ask for anything. She never gave it a second thought.

Why do it, I asked. "Because [this person] needed help."

And that, in a nut shell, is Janet Fenton.

I know there are dozens, perhaps hundreds, of students, staff, and faculty who have similar stories about Janet. Her spirit is embedded in the community ethos that permeate Seton Hall, and her style of servant leadership is one that we try to impart to our students.

There are leaders everywhere you look at Seton Hall, and I've been lucky enough to learn from one of the best.