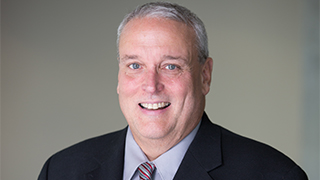 At the end of the Spring 2019 semester, James Kimble, Ph.D., professor of communication, stepped down as Associate Director of the College of Communication and the Arts leadership cohort to spend the 2019-20 academic year on sabbatical. In his place, Thomas Rondinella, M.F.A., associate dean and professor of visual and sound media, stepped into the role to continue the leadership education of the rising sophomores and begin that of the incoming class of freshmen. Rondinella has been a member of the Seton Hall University staff since 1985 and brings a wealth of knowledge of leadership in the communications field to the program.

"I saw it as a challenge," Rondinella said when asked what about the position piqued his interest. "Dr. Kimble taught the first year, and it's something new here to our college. I'm used to doing new initiatives because I was part of the founding [of the College of Communication and the Arts] and being involved with building it from the ground floor up. I like this opportunity to get involved with something new again and help shape it and form it."

Rondinella prides himself on his tireless work ethic and the hours of devotion he puts into every project he undertakes. Outside of Seton Hall, he owns his own company, Catfish Studios, where he continues to pursue his passion of directing, writing, editing and filming feature films. He has been nominated for and won numerous awards both in his film career and academic career, but he believes it all comes from a pure love for what he does in both fields.

In his first year as an Associate Director in the Buccino Leadership Institute, Rondinella hopes to instill this same drive and passion into each of his students.