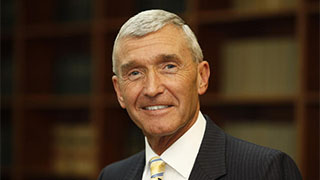 On Monday, November 2nd, Seton Hall honored Professor Michael Reuter on his retirement. Professor Reuter was the director of The Gerald P. Buccino ’63 Center for Leadership Development and now holds the rank of Emeritus Director. As the first full-time employee of the leadership program, he touched the hearts of countless students and faculty over his many years at the university. A distinguished and grateful crowd logged on to honor Mike at the virtual event.

I had the opportunity to speak with Professor Reuter and ask what it was like for him to reflect on the touching tributes shared by various leaders in the university. He talked about the importance of relationships, which are, at their core, based on trust and respect. In the first moments of meeting someone, Professor Reuter builds trust by showing how much he cares and respects them. He believes that meeting someone for the first time is equivalent to planting a seed destined to blossom into a strong relationship.

The evening featured remarks from University President Dr. Joseph Nyre, Dr. Gerald P. Buccino ‘63, members of the Board of Regents and the Center’s esteemed Advisory Council, faculty, alumni and students. A recurring theme throughout the night honoring Professor Reuter was how he enabled people to fulfill their potential. Dean Joyce Strawser referred to him as "elevated," and Professor Reuter interpreted Strawser's adjective as an homage to his ability to raise people up. Current student Michelle Inn and Mr. Thomas Ferrando, a member of the Advisory Council, shared their gratitude for Professor Reuter’s unique ability to convince people they were capable of more than they could have ever dreamt.

When I asked Professor Reuter how he brings out the best in people, he said that when people trust you, they believe what you say. They start to see the potential you see in them and the potential that was in them the entire time. It was clear from those singing praises of Professor Reuter that even if they started to doubt themselves, there was no doubting his faith in them. 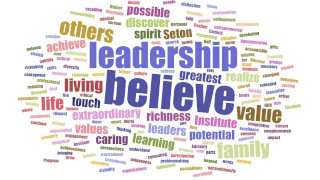 In his praises of Professor Reuter, Dr. Buccino, the Center’s longtime benefactor (and now the benefactor of the Buccino Leadership Institute), specifically highlighted the high standards to which students were held. When I asked Professor Reuter about these standards, he said that on top of asking his students to be well-dressed and well-groomed, he also asked them to live by their values. He expected his students to make sound decisions and use a moral compass while engaging in their leadership journey. Developing one’s leadership skills does not end when they leave the program, he noted. Professor Reuter expected his students to be guided by their values throughout their lives.

When asked to reflect on his legacy at Seton Hall, Professor Reuter said he wanted to be known for more than just his leadership program. It’s impossible to bring up his name with students and others who he influenced at the university without them smiling. Professor Reuter’s legacy is not only cemented in the program that he built and that will develop future leaders at Seton Hall, but it lives in the spirit of every individual he inspired to be their best. Professor Reuter is the best of the best, and Seton Hall is lucky to have been graced with his presence.