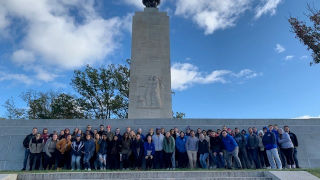 For many of the 67 students on the trip, including Johannah Manon-og, it was the first time visiting the iconic battlefield and the largest battle ever in North America.

Manon-og, a sophomore leadership student in the College of Arts and Sciences, found the trip especially impactful. "It was truly the most informative and impactful history lesson I've ever experienced, something that will resonate with me forever."

That was music to the ears of Executive Director Dr. Bryan Price. For Price, Gettysburg is the perfect place to demonstrate the leadership theme of "leading others" for sophomores in the program.

"At the [Buccino Leadership] Institute, we don't just learn about leadership in the classroom. Whether we are coaching them in our student-led initiatives, mentoring them in semester-long interdisciplinary team projects, or taking them to places like the 9/11 Memorial or Gettysburg, we want our students to taste and feel leadership. We want them to experience it first-hand."

Accompanying the leadership students and faculty on this trip was Matthew Borowick '89/MBA '94, Vice President of Advancement for Seton Hall University and an avid Civil War buff. He was instrumental in crafting the itinerary and was an amazing source of knowledge throughout the battlefield tour.

"Gettysburg provides our Buccino students with a wealth of fascinating leadership case studies," said Borowick. "Exploring these military decisions in detail helps us examine the applicable lessons these future leaders can use in the days and years ahead. I am grateful for Dr. Price's kind invitation to join him and the students as we walked the fields of this defining moment in our nation's history." 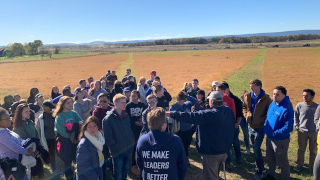 After a few hours of sleep Thursday night, the students embarked on a full day of touring the grounds on Friday. Gary Kross, a tour guide at Gettysburg for 32 years, met the students at the Visitors Center early Friday morning.

Kross then lead the students to various locations during the 3-day battle where critical leadership decisions were made. This included Reynold's Ridge, where Major General John Reynolds famously delayed the Confederate advance on Day 1 so that Union reinforcements could make it to Gettysburg just in time to take the high ground. Reynolds was killed in the attack.

Standing on Little Round Top, students listened in amazement to the heroic story of Colonel Joshua Chamberlain and the 20th Maine's desperate attempts to hold the Union flank. After repelling five withering attacks from Confederate forces hoping to take the high ground, Chamberlain's men ran out of ammunition. Told by his superiors to "hold the ground at all hazards," Chamberlain made a bold decision. He told his men to fix bayonets and charge at the attacking force. The daring move ultimately drove the Confederate attackers from the field.

At every stop, students and faculty reflected on the leadership decisions, both good and bad, that impacted the outcome of the fight.

Yolanda Jackson, Associate Director for the College of Education and Human Services, thought the students benefited from critically analyzing these decisions, especially those that ended poorly. "The Gettysburg trip showed our students that true success does not happen without failure. Strong leaders learn and build strategies from both their failures and their victories."

At one level, it might seem a stretch for future nurses, teachers, business professionals, and diplomats to learn about leadership from a military battle waged over 150 years ago. But not for Madison Vance, one of the leadership students from the College of Communication and the Arts.

"What we learned this trip applies across disciplines," said Vance. "I can see how being a leader on the battlefield and the strategic decisions and sacrifices the soldiers made during the Civil War applied to my area of study, and to those of my peers in different colleges at Seton Hall."

Vance and her fellow students grappled with many of the challenging situations faced at Gettysburg. How do you make decisions when you possess imperfect information? How do you respond to crises when you don't have the proper resources? Am I willing to make the tough decisions that I know are right for my organization but unpopular with my employees? 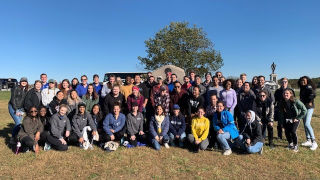 Amy Chin, a sophomore in the Stillman School of Business, reflected on what she took away from the experience. "Learning about the mistakes and successes of others was an eye-opening experience in how timeless leadership lessons can be. There was a lot to learn about communication, preparation, and perseverance, even when these ideas, in application, look very different today than they did 150 years ago."

Walking the battlefield also moved Alyssa Castillo, a leadership student in the College of Arts and Sciences. "This trip has inspired me to work every day with passion and purpose. Being able to experience firsthand how devoted those soldiers were to something bigger than themselves makes me proud to be part of the Institute."

After traversing the Union's line on Day 3 of the battle, the students then drove to the center of the Confederate line, exactly where Major General George Pickett and his men were preparing to make the almost-mile approach, uphill, to attack the Union center in a perilous frontal assault.

"You can't really understand what those men faced in that assault by reading about it," Price said. "You have to walk it."

And walk it they did. Just like the 15,000 Confederate soldiers did on Day 3 when they crossed the vast expanse, under fire, and in the open. A little fun was also had along the way, as each college/school's leadership cohort had a go at scaling one of the field's many wooden fences.

The students made it to the spot called the Bloody Angle, where the Confederate attack reached its "high water mark."

According to Dr. Kathy Connolly, the Associate Director for the College of Nursing, her students were astounded by the magnitude of the casualties at Gettysburg and the price our country had to pay to move it in the right direction. She remarked, "The trip was rich in leadership lessons that demonstrated this type of progress doesn't happen by accident."

Perhaps the most poignant moment of the trip occurred at the end. Standing on the same soil where over 50,000 soldiers were killed, wounded, or captured, the students took turns reading portions of President Abraham Lincoln's famous Gettysburg Address.

It was a moving tribute to those who gave "the last full measure of devotion" and a moment these young leaders will remember for the rest of their lives.